Alright so here is another one about my pfSense and TP-Link Experience.

The Switch should support VLANs however when ever I assign a VLAN to a port it picks up an IP but says no internet connection then when I set the AP to multi SSD mode and configure SSID’s and VLANS I connect to the guest network which should have the IP of 192.168.3.x however it picks up the IP 192.168.0.x.

It is probably the firewalls as I did not touch them whilst configuring, How would I configure them?

Start with open rules on each VLAN to test and then narrow them down as needed to the level of restriction you want.

I strangely had similar issue accessing internet, I found the systems were not taking DNS so I set DNS in all VLAN’s under DHCP Server.

You need to configure port in SG108E where you connect your AP as trunk port i.e. you need to assign TAG port to all the VLAN you create in SG108E.

You can share your 108E port setting so that we can see and know where is the issue.

I am not sure of AP you are using supports multi VLAN SSID, I used similar setting with 108E and EAP 225 accesspoint of TP Link.

hi
I used similar setting with pfsense 2.4.5 vlan 122 config in pfsense and Switch TL-SG108E and AP TP-Link EAP 110.
but pfsense not DHCP Leases on vlan 122!
my config
im see video for config

in SG108E the port which you connect needs to be on both Member Ports and Tagged Ports, like I have Port 1 and 8 as trunk ports in my configuration.

Then in EAP you have to configure SSID for VLAN 122

Thanks for the help. I have one SSID working with VLAN 10 however the other 2 SSID picks up an IP and says connected but do not give internet access.

Thanks, I pinged it and nothing so I went on to google and searched something so I could run Windows Diagnostics and it said it was a DNS error. In the DHCP server settings I have DNS configured to Primary: 8.8.8.8 Secondary: 8.8.4.4 this is the same for all VLANs including the one that works.

All networks working expect the Guest one. Can someone advise me on who to configure the firewall for the guest network. Also how to setup a captive portal as it does not work upon connecting to the network.

in SG108E the port which you connect needs to be on both Member Ports and Tagged Ports, like I have Port 1 and 8 as trunk ports in my configuration. 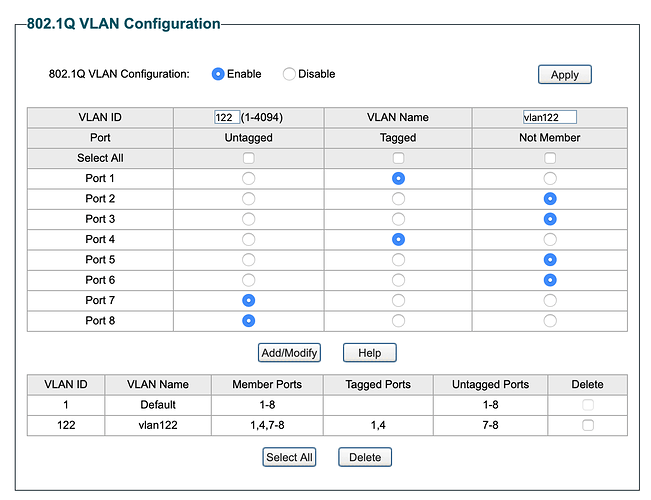 You can setup a DHCP server without enabling it. Did you Enable it?

yes enabling but not lease!! ips on vlan

Are you using WiFi or a Network Switch?

My Network diagram
help dhcp not lease on vlan 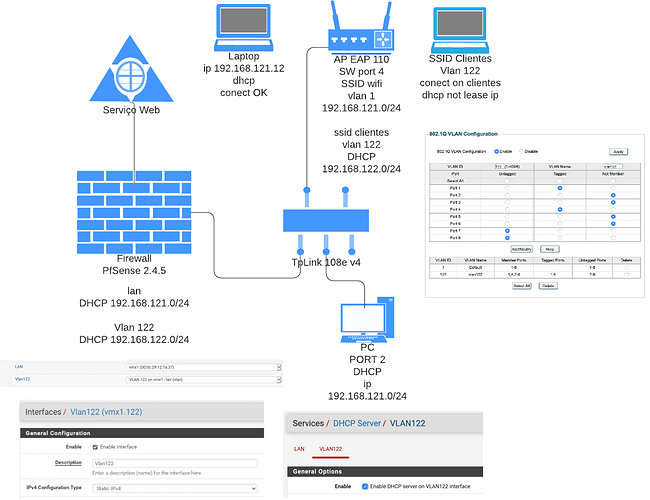 With your set up you’ll basically only get one LAN regardless of what you do on PfSense.

There are cheap netgear switches and TP-Link Access Points that you can acquire for not much money.

You are wrong. They both support VLANs because I contacted TP-LINK and asked. Also if they don’t support VLANs how come I have them setup and working right now?