All things being equal (same x570 motherboard, same DDR4-3200 32gb ram, Radeon RX 570 Video card, etc.) which of these two processors would you use for a 4k video editing workstation?

My thought is that under my workload, most of the rendering work will be offloaded to the GPU, but there will be effects, etc that will have to be processed by the CPU and that is where I am wondering if the higher core count of the older 2700x would give me an advantage.

Yes I could save a few more pennies (and I might do that) and get the best of both worlds with the 3700x, but right now I’m trying to keep this build in a budget that will not put me in the dog house.

Thanks in advance for your thoughts.

For the editing work I do with Kdenlive having more cores is better and based on that the 2700x with 8 Cores / 16 Threads would be a better choice for my editing.

Good to know Tom! Right now I’m on a Mac and I use Davinci Resolve for my editing. I would consider switching to Kdenlive once I have made the switch to Linux.

Correct me if I’m wrong but Kdenlive does support hardware offloading where it can correct?

Cheeck out Wendels post on Level1 Techs he has done very detailed review of both processors. You do not have to give up your Davinci Resolve works well on Linux.

I’ll be sure to check that out! Thanks @g-aitc!

As far as giving up resolve. I don’t plan to…but I might because as I understand it, the free version does not support h.264. I could buy the program (and I might) but I also wouldn’t mind trying a FOSS option.

Kdenlive does not have good support for hardware offloading, but here is a 22 minute video that is at 1080p 30fps rendered in just under seven minutes on my Ryzen 9 3900x. I would not say kdenlive is the best editor and is nowhere near as advanced as DaVinci Resolve, but it has worked great for the over 900 videos on my channel. 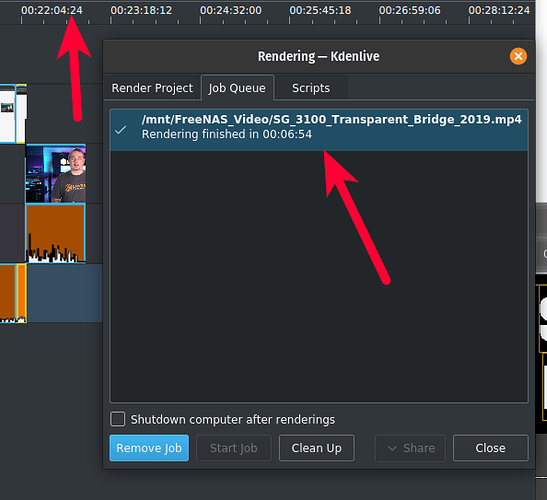 Plenty of FOSS trans-coders out there. Can put on it own machine that way you are not interrupting your editing workflow. Have client doing this even though they have paid version. They also use FreeNAS for storage with 10Gx4.

Tom, can you venture an educated guess as to what that render time would look like on a 2700x or 3600? I’m trying to do some VM based testing of stuff and am really struggling.

I can’t really speculate how fast render times would be as I don’t have enough data points form different processors.

Fair enough. I was hoping you might have enough data points. I can speculate based on Cinebench scores and that will have to do.

@w9hdg Wendel of Level1 Techs youtube and also level 1 Linux has a good bit of info on render times and other data on the AMDs.