Hey guys,
I just moved into a newer apartment and it has a lot of Ethernet ports around the place that I’d like to use with a switch. They all feed into a conduit (picture attached) but it seems like the Ethernet cables are stripped and then placed into that grey plastic piece.

Not sure what I would need to get these cables back into regular jacks or what the original purpose of that plastic piece is. I’m pretty new to this so I thought this would be a good first project. Would appreciate any tips! 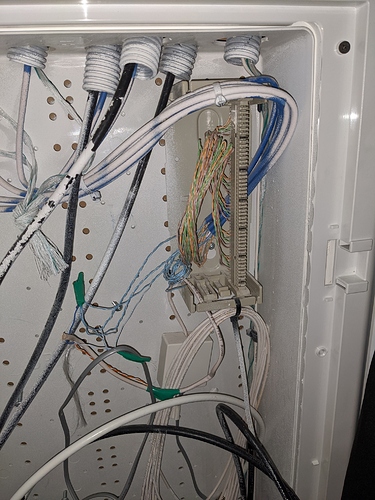 That appears to be a phone block, make sure the cable itself is acutally CAT5e.

Hm there are only ethernet jacks in the apartment, no phone ones. Unless they sometimes can be the same port, I always thought they were smaller though.

You can plug RJ11 and RJ14 phone plugs into an RJ45 jack. That is wired up for use with an analog or digital phone system, not for IP traffic. You would have to re-terminate the ends in the box and cut the cable back to where you still have good twist before terminating to make that work for ethernet. Also, that cable could be cat3 or very old cat5 (no “e”) cable as well. You’d need to look at the writing on the sheath to see what category it is.

Looking at the image closer, that cable is at least cat5, probably cat5e. It is wired up for phones (see how all the blue wires are connected?) but there is enough cable there that you could easily reterminate in a small patch panel or just surface mount boxes if there aren’t that many cables.

Keep in mind that you would also need to have your switch located here since that’s where all the cables come together.

Hey thanks! I didn’t actually know phones sometimes go through RJ45. I shouldn’t have to reterminate the wall jacks right? Just the ones in this box for the ends that I want to use?

You’d have to inspect them to be sure all the wires are terminated, and whether they used 568A or 568B wiring. Phone systems often follow 568A wiring while ethernet almost always uses 568B.

Either standard is just fine, as long as you use the same one on both ends. Otherwise you wind up with crossover cables built into your walls, and while most switches and nics figure this out all on their own, it can be hard to troubleshoot if you find one that doesn’t.

If you pull one of the faceplates off and take close up pics of where the wires go into the jacks, we can tell you which standard and whether they are wired right.

Then, you will need a punchdown tool for 110 blocks, a patch panel (or SMBs and more jacks) and some YouTube time to learn how to terminate jacks and patch panels. I teach people how do do this in about 10-20 minutes, so it’s not terribly complicated.

This is awesome info, thank you.

All of that slack with the wires so close to each other will be bad for your Ethernet. Going to need to terminate those cables again with shorter stick out.

Yes it does look like at least cat5, if they hadn’t painted it it would be easier to see.

In the building where I work they only used rj45 jacks in the wall plates. One was labeled voice, the other data. They did use cheap phone cable for the voice lines though. 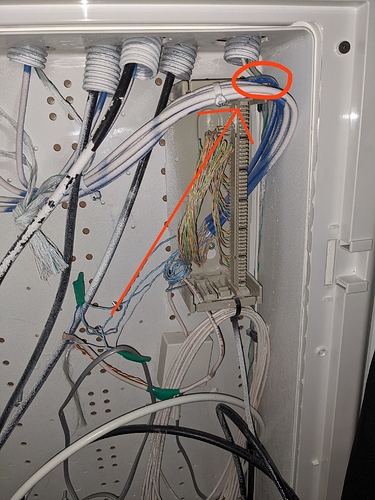 Good eyes, I missed that.

You may want to get permission from your property manager before you start this project.

I probably won’t patch panel it given the limited space. I only need a few of these terminated so I was thinking I’ll get some jacks and use YouTube

Also thanks for the tips, is there any interference issue with having “leggy” connections?

I do! Thanks though that’s good advice.

Ah yep that would be great thanks again!

It can, but as long as the twist is preserved, it should function just fine. The jacket is there to protect the wires from damage. Having them exposed where they could be flexed, bent or nicked is what you want to avoid.

Also, it looks neater, but that is purely aesthetic.

The strain relief in the connector won’t work if the outer jacket is not up in place like normal. Not the biggest issue inside a bod, but something to be aware of.

Thanks everyone, just removed one of the wall plates to get a look at how they are currently wired and this is what I see. 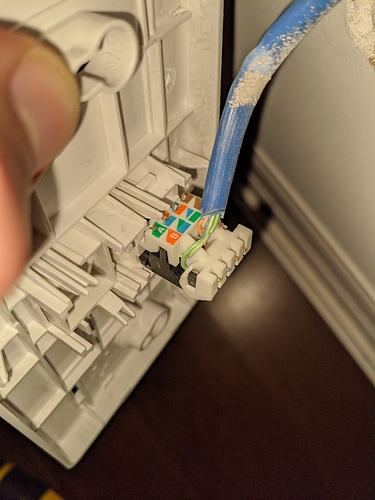 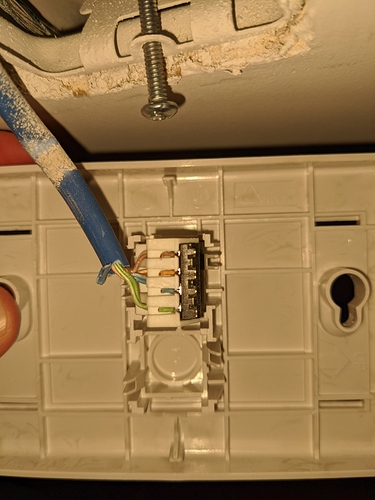 Those are phone Jack’s and cannot carry data. Cable is fine. You will need new Jack’s and faceplates as well…