I work for a small business with 15 employees. We’re gonna need to setup at least 3 Windows 10 VMs in our office. One of them will serve as a licensing server for an accounting software we use and the other two VMs will be used as remote desktops for Mac users who need a W10 machine from time to time for said accounting software.

I figured the way to go would be to install Promox or XCP-NG on a server. But I’m not really familiar with the hardware I might need to have decent performance. There’s two options I am looking into:

How do you reckon they will perform ? Do you have other suggestions I should look into ?

The hardware has to be reliable since it will all be used in a production environnement. And, as you can see, I’m also aiming at keeping budget as low as possible.

Thanks for your advice.
Cheers !

Of the two choices, the T40 seems to be a better option. I’m running Proxmox at home, didn’t have any issues but you might want to ensure you have a multi-NIC card, it needn’t be too expensive.

You can also run multiple nodes with Proxmox so having a second box should come into your planning.

For contrast, in the USA you can get an older used Supermicro X9 with 20 cores (40 threads) and 128GB of RAM for $500 plus shipping. Most of these have four 3.5 inch drive bays and caddies.

Two or three of those would run everything I need at work and have HA failover protection with every VM at least 4 cores, but likely 8 cores. These servers are not that loud or hot. They were from 2011 or 2012 and that series of board lasted up to about 2016 where the X10 became the more popular choice, with X11 being current product.

Thanks to both of you for answering. It’s really appreciated!

Of the two choices, the T40 seems to be a better option. I’m running Proxmox at home, didn’t have any issues but you might want to ensure you have a multi-NIC card, it needn’t be too expensive.

Yes, it’s too bad at least two NICs aren’t installed by default. With such a low price, I guess you can’t complain too much.

For contrast, in the USA you can get an older used Supermicro X9 with 20 cores (40 threads) and 128GB of RAM for $500 plus shipping. Most of these have four 3.5 inch drive bays and caddies.

Never heard of Supermicro X9. After spending a few minutes on their website, I am not really sure what their offer is. Do you have any examples of those $500 builds ?

All the help is really appreciated.

Here is one of them, only available for a few more days. Wishing I had an extra $1650usd right now because I would buy three like this to have slightly newer, but far more powerful servers for my lab.

Find many great new & used options and get the best deals for Supermicro SuperChassis Cse-813mftq-441cb 440w/480w 1u Rackmount Server Chassis at the best online prices at eBay! Free shipping for many products!

I have 3 older Dell C1100 which were around $150usd when I bought them. 12 cores (24 threads), 72GB of RAM, quiet but make a lot of heat (even at idle). XCP-NG seems to run fine on these C1100 and I can get a good 4 VM’s running on each and still failover. Testing failover is the entire reason I bought 3 servers, I was planning and replacing a bunch of servers on my network at work, and wanted to model (with older equipment) what I was going to build for work. The plan was working until the entire world shut down for 3 months, now the money is not available and I’ll have to go until next budget year to replace old servers. I also bought an HP DL360p G8 server for my lab Freenas, running NFS for the XCP-NG storage to allow the HA failover, that whole lab network is still running on gigabit connections

I have a bunch of the Supermicro X9 generation in my system at work, they are pretty good and tend to last a long time. I also have some older X7 and X8 generations which still work as well as they can with modern software. I used one of the X7’s for almost a year as my pfsense firewall, it was plenty fast for that application with 8 cores (8 threads) of old Xeon processors and 16GB of RAM. But LOUD, glad I was able to shut it down again. Also used the same server for testing Apache Guacamole which allowed me to get 6 remote computers connected and running video on them at a decent frame rate. Old stuff comes in handy once in a while.

If you are concerned about noise going with a newer tower system will most likely be your best bet. For what you are trying to run you shouldn’t have any real performance related issues, just make sure you have enough memory to allocate to each vm and still have some left over for hypervisor as well. FYI in order to run Windows 10 VDI you need either SA or VDA, to be licensed properly.

I’m not up on my MS licensing… SA? VDA? All I know of this is, as you mention, a normal desktop license is not correct for a VM. Is the eval version of win10 OK to run in a VM?

I had a few Windows Server VM’s running, then realized that they were not really in evaluation mode. Destroyed them and downloaded the eval versions for my lab to fix the licensing mistake. Had half a domain set up before taking the time to fix the issue.

You mean “I shouldn’t have” right ?

I wasn’t aware of the MS licensing for VMs. I’ll look into it.

For the hypervisor, I’ll try Proxmox and XCP-NG, but I gotta say XCP-NG looks pretty sweet.

I made the switch from proxmox to xcp-ng and have never looked back. Well almost never I do miss my hyper converged ceph clusters, though admitted I have yet to dig into xo-san yet.

T40 is a good choice and maybe get a good intel Multi NIC card to atleast avoid 1 problem.

Get a Dell T140 with hardware raid… The T40 has no raid options. Get some desktop ssd’s and some brackets, you got yourself a fast server. I would go the RDS route, instead of VM’s. Could have all 15 users logged in at once on that server. You can get an Optiplex with raid 1 as the licensing server.

Thank you all for your answers !

I was looking at the T140. I saw it has the idrac thing. I guess you can manage RAID directly from there like I saw in Tom’s video (the one withe xcp-ng and the Dell R710 from TechSupply iirc)
The T140 is a little more pricy. I’ll talk to my manager about it.

I would go the RDS route

I’ll look it into. What kind of server OS you would you recommend ?

We use Server 2019. Buy the license with the server. RDS is just a service on the server you have to activate.

This doesn’t solve the “problem” I have with Mac users who need to use a W10 only software (like that f*ing accounting software) from time to time though.

Sometime soon, I want an AD even if we’re still a smaller sized office. I was thinking about activating the AD package on the Synology DS918+ we already have and maybe managing it from a W10 VM with admin tools enabled.
It would be really convinient specially for the GPOs we could set.

I’ll talk with my manager to go for a T140 and give you updates on the situation.
Thank you all very much for you very valuable input.

Mac users should be able to rdp to the server without problems. The nice thing whit rds is that you only install the software once. We now have about 30 users on a T440 as rds server running Windows Office and Exact Globe.
Setting up AD on the Synology is an option, for now. Haven’t done it before, since we already have AD and DNS servers. Mostly we use 2-3 year old pc’s with new hdd in raid 1 for those. Plenty pc’s available…

Does it also require RDS gateway?

Can you (or someone else) take the time to explain to us the licensing aspects to get win10 VDI’s set up? MS licensing is a mine field with no real directions and I’d like to understand it better if anyone that has gone through it could write up a post that roughly outlines what we need. I’ll probably never go this way, but having a rough idea in my head would go a long way if things ever change.

The last place my wife worked had some kind of Cisco vpn/RDS gateway set up, it would spawn a server 2008r2 instance every time she had to work from home. I thought that was odd until someone on here mentioned that Win10 is not normally available for use in a VM. That company was also still mired in Win7 which is why they were using server 2008r2 VM’s. They started the change to Win10 just as she was leaving.

A RDS gateway is required if using Windows Server. You can however deploy all RDS services on a single server which would be ideal for your use case. If you want to use win10 VDI you don’t necessarily need an RDS. However you can use RDS to provide access to the win10 VDI which would definitely be more secure but does come at the cost of need both the Server licensing and the VDI licensing.

My advice, forget about RDS. It is waaaaay more expensive than anything else. Last time I checked, a normal retail licence of Windows 10 allows VM use. Just remember, one retail licence, one VM.

Performance will be OK on the T40 I think. RAM matters, so have plenty. Maybe at least 4-8 GB per VM. Your remoting protocol is also important to have a decent performance. While normal RDP is OK, it consumes a lot of network bandwidth because it doesn’t compress the video data much. Something like Parsec is way better and it’s free. Downside, you need some video card per VM that supports video encoding.

Anyway. For 2 VMs, no big deal. Just go with RDP. For more, if there is a lot of movement on screen (like a video), RDP will choke because of the network overhead.

Unless it changed, this article suggests differently about the VDI licensing: 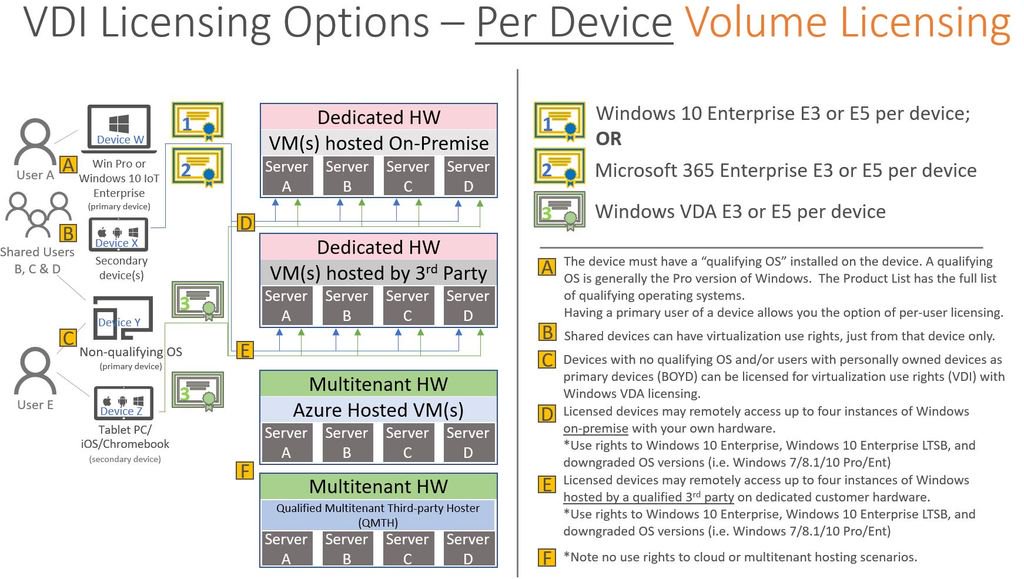 License Windows 10 for use in virtualization environment – including...

There have been some changes to the licensing model for licensing Windows 10 for use in a virtualized environment (aka VDI or virtual desktop infrastructure)...

And this PDF from April 2020 also reinforces the same:

Normal retail licenses are not to be used for VDI.

Now do I think this is a bit heavy handed? Yes, yes I do. Do I think people are breaking this license every day? Yes, yes I do. But we need to make sure that what we suggest is on the correct side of legal, what a user does after that is up to them.

Why do I think this is so bad. Well because a small company with say 10 employees that wants to virtualize their desktops is not allowed. They will not be able to buy or afford an e3 or e5 enterprise license. I’d like to know how Dell and HP and Lenovo handle this when they build out an office of 10 thin clients running win10 IoT at the desk. Obviously with IoT there is a VDI somewhere, and somebody needed to license that. I doubt the VM specific licenses are cheap enough for many small businesses to afford.