But I’m having some trouble getting my VM’s to apply the changes in the Cloud Config box in XOA.

I have made a new VM from the default templates.
Installed Ubuntu 20.04 LTS server edition.
Run the apt-get install cloud-init cloud-initramfs-growfs
I have not made any changes to the /etc/cloud/cloud.cfg
I have run the dpkg-reconfigure cloud-init after installing cloud-init

when selecting with options to pick from I chose these: 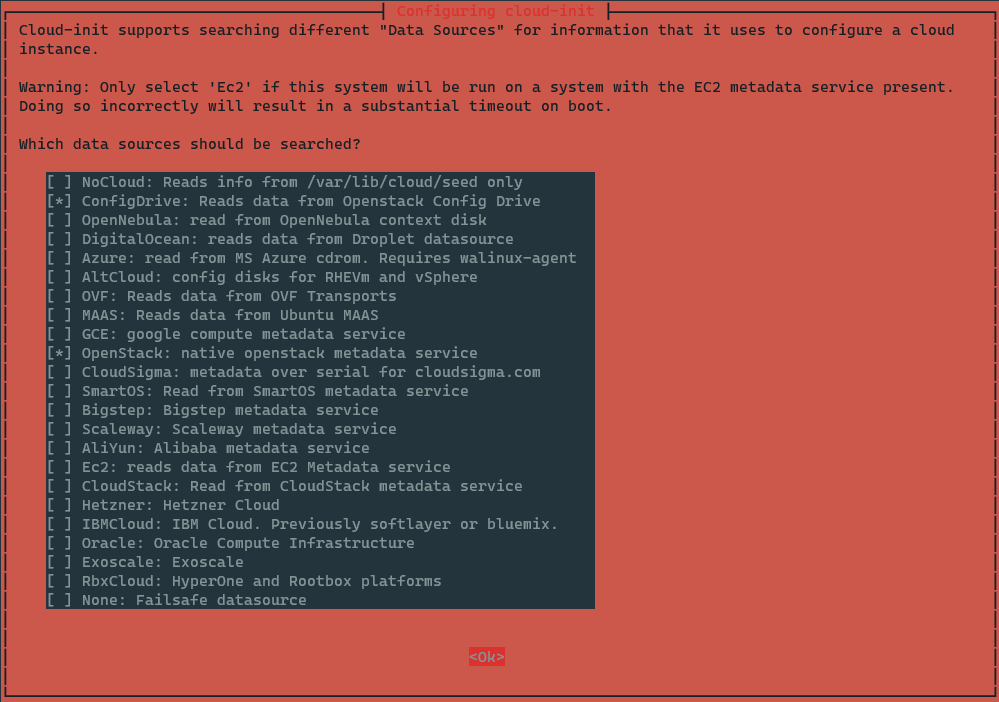 This is what I have in the XOA Cloud Config tab: 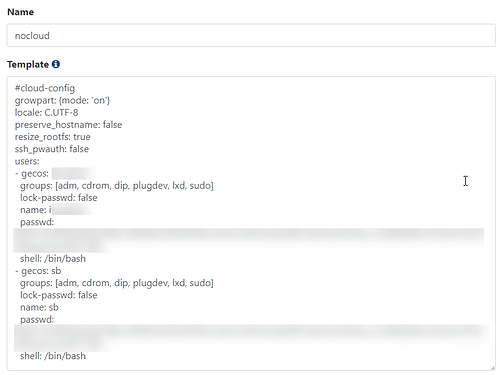 any ideas why this is not just working?

@LTS_Tom This might be up your ally with XCP-NG and XOA, any ideas?

Have you had any luck with this?

I managed to get my Ubuntu 18 Template working…

After a clean install of Ubuntu 18 on Xen Orchestra/XCP-ng, I did the following(could be unnecessary):

Prepared my server with all my apps and Tom’s dotfiles.

and on the network side to remove ‘#’ from network: and version: 1

created a new VM and set the name, resources and disks and confirmed that it all worked.

I forgot to add that you need to remove the cloud-init files after the purge:
sudo rm -rf /etc/cloud/; sudo rm -rf /var/lib/cloud/

@barendbotes hey mate - Struggling to produce the same success that you have here.

I’m using an Ubuntu Server 18.0.4 official live image for my template, prior to stumbling on your messages, I didn’t purge or remove the cloud-init files, not that it made a difference because I still had no success anyway. But even doing both of these, no results.

XO creates the source drive fine and the guest OS see’s it. Mounting the drive and looking in it contains the correct meta-data so that’s fine however it seems that the metadata is just not getting injected on boot. The logs for cloud-init show that it’s loading config from the installation (user created by installation etc). Nothing to show that it’s even looking at the Cloud config drive created by XO though.

When spinning up the VM are you removing the “#” from the network config? I remember when creating a new template that I had to apt purge/remove the cloud-init install for some reason and then reinstall it only selecting “NoCloud” for it to actually work.

Hey mate thanks for getting back @barendbotes

I don’t even bother feeding it any network config since I can’t even get it to inject basic things like hostname or user etc. I’m using this same one…

I hit up Oliver over on their forums he seems to think it’s nothing to do with XO.
What build of XO are you running? I’m on xo-server 5.65.0.

I mean, it’s a fairly straight forward process but for whatever reason, no matter how many VM’s I make, none of them let XO inject the cloud-init config. I’ve been at it for over 8 hours now

Is there anything you might have missed in your process above?

Hmmm seems I got it to work just thought I’d let ya know before you reply.

It’s either one of the following that caused the issue which I am testing now:

Well, there goes bloody 8 hours of my day. I can finally take a bath and eat lol!

Thanks for sharing your findings.
I will try mine with the 20.04 image later this next month!

I got the network config to work with Ubuntu 20.04 but however I cannot get normal config(hostname, ssh keys) to work with nocloud. Then I enabled nocloud and ‘openstack’ but now only openstack works. Does anyone able to config the sshkeys as well as network config?

What I’m trying to do is use terraform to deploy K3S cluster. For that I need to be able to setup all the ssh keys and setup static ip’s so that I can easily deploy ansible to setup the cluster.

I have not used Cloud Init but Jay has a video on it here:

I managed to get ssh keys and networking working with nocloud, I just had to start from scratch. This worked with Ubuntu Server 20.04 and 22.04.

However I cannot get the storage to work currently with terraform. xcp-ng goes and changes the size of the disk while VM is running but this leads to a unbootable disk in the vm. I have yet to find the cause of it. My guess is this has nothing to do with cloudinit but with how xcp-ng changes the size of the disk and leading to some sort of a corruption. Does anyone have any lead on expandable storage?

Thanks @barendbotes for your tips. This is what I did to get the cloud-init to work.

This is what I sent in through terraform. First cloud_config

I figured it out, seems like storage modification leads to deleting the old drive and creating a new(by terraform). I’m putting the VM on to a ext drive which is thin provisioning compatible, if that matters. I’m fairly new to xcp-ng but I cannot even figure out how to modify the storage allocation manually. What am I missing?

I publish what I got on terraform into GitHub - hansaya/xcp-ng-k3s-terraform: Deploy K3S/K8S cluster into xcp-ng using Terraform. If anyone interested in look into helping me out ironing out any issues.