Am looking for some help setting up an internal network between hosts. The main reason for doing this is for Continuous Replication as I would like it to happen internally as currently, it goes out via the WAN and back again.

When I migrate Server 1 > Server 2 it does so via the bonded connection, the same applies to the other way around.

When I run a Continuous Replication from Server 1 > Server 2 it uses the bonded connection. When I run it the other way around it never completes. Hours later and the progress is still at 0%.
Server 1 can ping Server 2, same the other way.

VMs can’t ping VMs in other Server, but the XO installs can ping each other from server to server.

When the bonded connection is disabled Continuous Replication works both ways via eth0 but the issue is it uses bandwidth since it leaves the DC via the Public IP and back again.

What is the best way to set up the backup to work internally? DC has told me I can create a Private network on eth0 using 192.168.x.x or 10.x.x.x which won’t count towards my bandwidth limit. I added the bonded connection thinking it would work but doesn’t. They also said I can connect both via my own switch but would rather not.

If adding both servers to the same pool helps am happy to do this. Am open to any suggestions and help.

Would probably need a network map to figure out where the issue it, but my guess is it’s either firewall rules or routing issues. 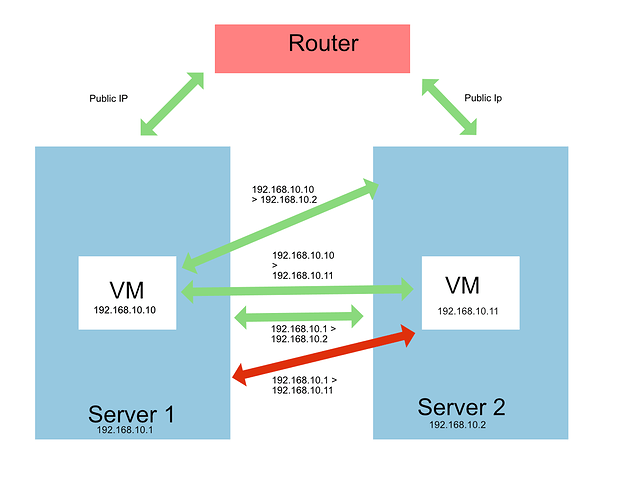 Network1280×1024 69.9 KB
This is a very rough diagram I made yesterday. Each physical server has multiple VMs in them and all VMs within Server 2 won’t connect to Server 1

I have only shown 1 VM within each server for ease. You can see the public IPs and which connection doesn’t work (VM Server 2 > Physical Server 1). Also, the VMs shown at the XO installs.

If the interfaces on XCP-NG are hooked up to the same switch and assuming based on your diagram they are on the same subnet then I am not sure why they can’t talk.