So this is just a home lab server, but I had a UPS fail this morning on a dell server running xcp-ng. I replaced the UPS and booted up the machine, but I’m getting a boot loop failure on the machine. The server is installed on a local six-disk raid and all drives are healthy according to the iDRAC and raid utility, but I’m still guessing the boot partition got corrupted.

I’m creating an installer usb disk to see if there are recovery options built-in, but any other ideas?

TLDR - server was in the wrong boot mode (BIOS vs. UEFI)

I evidently originally installed xcp-ng in UEFI boot mode after setting the boot mode to UEFI using the F12 boot option (one-time boot). However, the normal boot mode was BIOS.

Since I haven’t rebooted the server in 6 months, I never caught the issue, and only after trying to do an upgrade with a usb drive, did I get the following message: 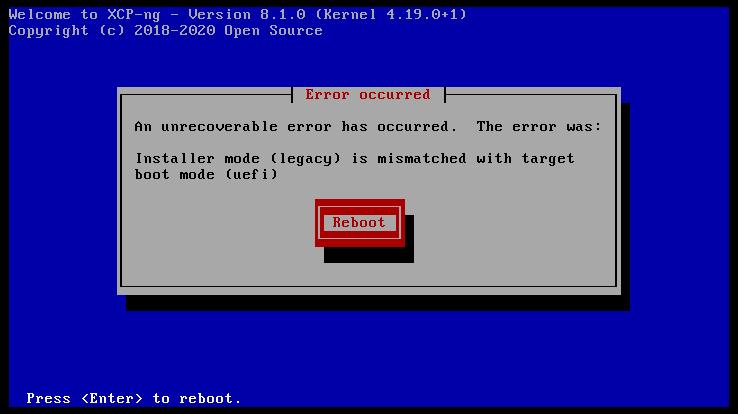 This clued me in and I changed the permanent boot mode (F2) to UEFI and did a reboot.

Everything is working flawlessly. Hopefully, it’s another 6 months (or longer) before this thing is rebooted.