I was about to purchase a Netgate SG-1100 but then some people recommended me that i instead look at those Qotom pc box and now i’m not too sure which is the best option for my needs. I don’t need something overpowered but i also don’t want something that will be too slow when navigating into the menu.

So here are my needs. My internet connection is 60/15 and i don’t have the option to upgrade to a 1Gig connection so i don’t need to support that. I want to run pfbloker for sure and i’ll be using OpenVPN from time to time. Eventually i would like to run suricata.
Locally i’m running a Plex server which is not open outside. Other than that i’m doing streaming and couple of torrent each days.

I’d say there are much cheaper options, I bought a barebones chinese box similar to the Qotom for about £160 added a hdd and ram I already had, no issues with the unit. Any bits die I can easily replace it. Have my box doing what you want plus some more (however I run suricata via Security Onion in a VM that needs a lot of RAM). Screen shot of the SI, doubt you need as much power as you think. Personally I can’t justify more than £200 for a router, then another £100 for an Access Point, so kinda adds up when compared to a consumer router. 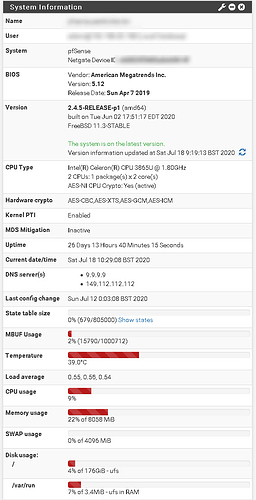 I have an SG-1100 at home with a 200mb connection and it works just fine. But it will not work well with Snort or Suricata and for that you will want a faster system.

I have a used HP T620 Plus with a 4 port Intel card in it that works well at home, but I’m not running Suricata so not sure I can suggest it. It seems to have plenty of CPU, but again not tested. It was around $160 shipped when I bought it.

Thank for the answer and suggestion. I will check this out !