Will this work? UDM-Pro and eero

I’m new here, but have been a longtime watcher of @LTS_Tom’s videos. Thank you so much for sharing the knowledge.

Forgive the long post; I’ll try to be as direct as possible.

I currently have a mostly UniFi network at my small business. UDM-Pro, US-16-XG, USW-Pro-48-POE, and about 10 Flex-Mini’s. For wifi, I use 6 eero Pro’s in bridge mode.

I really like eero and in fact that was all I was using for networking at first, until things grew to a point where I needed more capability. When adding the UniFi gear to the mix, I did switch the eero’s to bridge mode, but you do lose some features of eero (DFS, traffic stats, etc) that I wish I could use.

So, the main goal of this idea is to take the eero’s out of bridge mode. I know that normally that would mean a double-NAT situation, but I was wondering if a setup such as this would work to make that more seamless and allow my wireless devices on one subnet to talk with wired devices on another.

eero says that they handle double-NAT really well, by using UPNP to punch port forwards thru the outer firewall. I don’t need any port forwarding on my wireless devices. I’m not sure what other things I need to be aware of with double-NAT.

Note that eero has said many times that their system does not do well with VLAN tagged packets, or STP, so I’m trying to avoid that. My understanding of UniFi VLAN handling is that if you set a specific VLAN in the switch port profile, it will strip the VLAN tag on egress and add it on ingress. That is the basis for my idea depicted here: 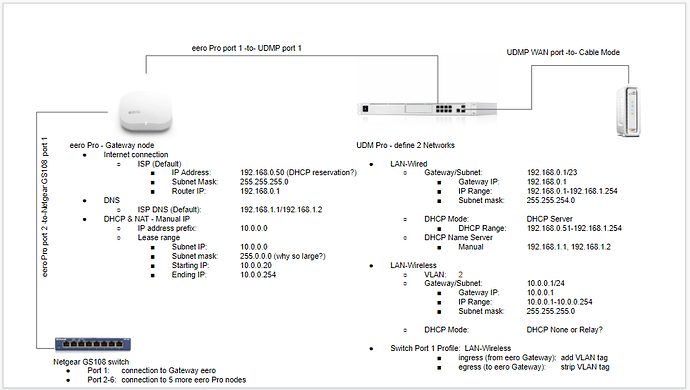 Would this work? Is there an easier way? Yes, I’ve thought about going to UniFi AP’s but really love how plug-and-play eero is, so that is not on my radar at the moment.