What would you do if you found they wired the house like this?

A custom built home in my mom’s neighborhood in Michigan wanted to update their switches to 1 GB to go along with their new Comcast speeds. But they found they couldn’t get more that 100 mbps on their Cat 5e cables. Opened up one of the wall plates and found this, why in the heck would the installer split out the blue pairs for phone? It’s a easy enough fix to put everything back together since he didn’t daisy chain anything. I have 12 wall jacks to fix and have to put in a new keystone panel in his basement. 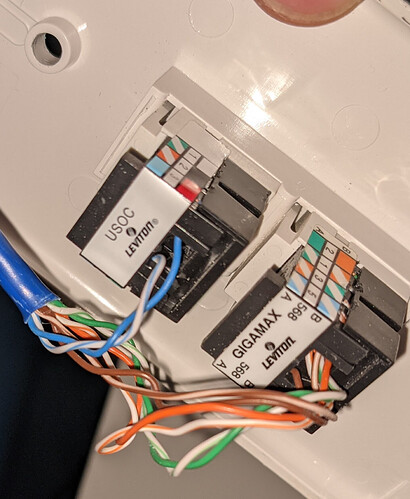 People do this so they can run one cable.

If it was built in the last year or two and there is a warranty, I’d make them come back and run more cable.

If that warranty is gone, or the company out of business, I’d fix it and forget about the phone because who has wired phones these days??? Keystone block off inserts are cheap.

Yes I am removing the phone keystone and putting in a single keystone wall plate at each location and re-punching down on the CAT5E keystone to specifications. As for warranty the house is 5 years old and I have no clue who the builder subcontracted out for the network. Shouldn’t take more than 4 hours to complete the work in the rooms and the basement.

At the basement termination point they just tied all the blue pairs to phone termination block and then plugged it into a ooma when the owner had VoIP services. They no longer have the VoIP services or needs for phone connections. The worst thing they did was directly crimp on the RJ45’s to the remaining pairs and then connected it to a old Netgear 16 port switch. I am putting in a nice wall mounted panel cutting off the RJ45’s and wall mounting their new switch which is also Netgear. I will custom cut patch cables to make sure the job look much cleaner.

When I joined an ISP back in 2003 their entire office was wired cat 5 - but with 2 jacks on each point - splitting the 8 into 2 sets of 4. As the building had only been built that year it was astonishing to see such a bad setup - and this was the ISP! Needless to say the conduits had also been daisy-chained from one to another and was unable to pull 2 cables into one point. I rewired all 8 to a single port and had to place switches in each office for when they changed from an older analog phone system to a digital one.

Some #@$%^ did the cabling in my house and I can’t even trace some of the video cable runs because the signal stops for inexplicable reasons before it reaches the end… I’m venturing a guess part of my issue is a special active 2 way splitter with a modem port will be needed.

I hope my cat5e that i want replaced with cat 6 or beyond will not do this to me at least for the time being. It’s crudely spliced for phone by the person who did it. I’m not pleased about it but at least the house has some kind of leviton panel to start with.