I know the windows world is not for you now but I have this technical glitch. using a windows DHCP I need to set up 4 VLANs and have them fully functional. Pointing me in the right direction would readily help.

Configure the network so Windows has an interface in each VLAN so it could provide DHCP.

Setup the scopes for each vlan on your windows DHCP server and use a DHCP relay helper on your router to point to the windows server.

If you are not virtualization the windows server, you will either need 4 physical NICs going to a switch that has the ports on vlans that you want or set up NIC teaming with vlans assigned if you only have 1 NIC (do a quick google).

If you are virtualizing, then the easiest is to make 4 virtual nics and assign them to the vm. Then 4 virtual nics will need to be trunked to a switch. Or you can also do NIC teaming, but it’s just easier to have 4 NICs assigned to different vlans.

I have a single (physical) Windows 2019 server with 4 DHCP scopes defined. I have 4 vlans defined within pfSense on the LAN interface, and the DHCP Helper package within pfSense enabled and pointing at the windows DHCP server.

The pfSense box is connected from the LAN to a UniFi switch with all lans enabled, and LLDP enabled to auto voice the cisco handsets to the correct vlan without needing to mess with them phone provisioning scripts. I have the wifi ssid broadcasting a vlan only network for wifi. CCTV is on a separate VLAN.

All inter-vlan routing is handled by pfsense, works perfectly.

Here’s how I did it using Windows DHCP server with multiple scopes, pfSense and UniFi equipment: 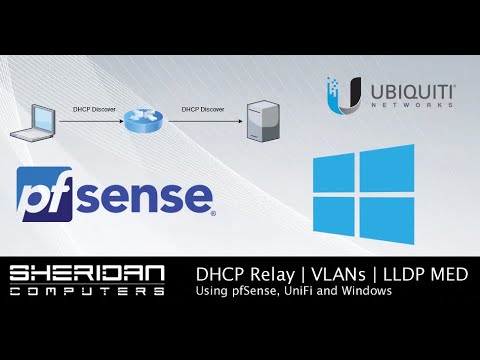 As @ssheridan has shown above DHCP relay is your friend for doing this sort of thing. No messing about with VLANs or extra NICs on the DHCP server.

I agree with a dhcp relay but his question lacks some info on how is he going to use the vlans. Are the devices in the vlan going to contact the windows server in anyway?

A DHCP request is a broadcast message that the gateway will forward to the defined relay.