I recently decided to hardwire my office so I can get 1GB speeds.
I have a central 24 port switch upstairs and an 8 port switch in my office.

My printer and MS Surface dock work fine wired in to the 8 port, but when I connect my dell docking station (Dell WD15) the 24 port switch is blocking the port connecting to the 8 port and the 8 port switch and all child devices go offline.

I thought maybe it was a loop due to wifi, but it does it even when I forcibly disconnect the wifi before connecting. 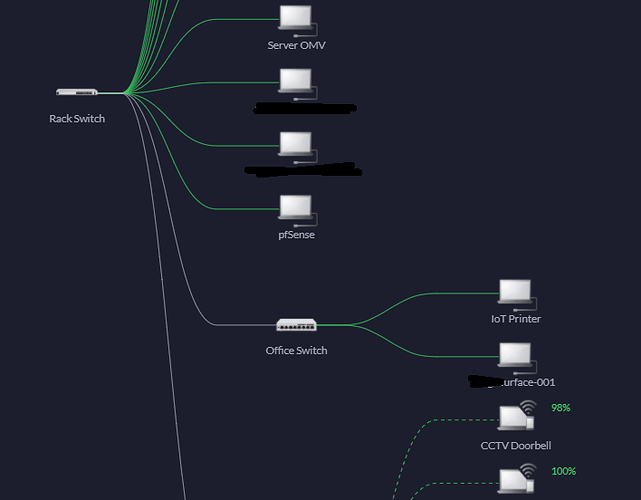 No, I only have one trunk connection between them. I think it is STP related though.
I was just reading about the WD15 dock. It supports MAC address passthrough.
I have no idea how this works, but suspect it might be the issue. Perhaps my laptop uses the same MAC address for wifi and LAN, even though they are not both connected at the same time, the switch will recognize the MAC coming through in two places in a relatively short time span? Just a guess. Not sure how I fix that if it is true. A work around would be to disable MAC passthrough, assuming that is possible.

something strange is going on. even with nothing else connected to the switch or indeed resetting it and re-adopting is causing it to be blocked. ive tried swapping all ports and cables jst to be sure.

Good grief … I lost hours to that.
STP priority was the issue.
I don’t recall ever having set that.

By chance I stumbled on a conversation talking about routing issues which mentioned STP priority. On inspection I saw my upstream 24 port switch had a lower priority than the 8 port office switch. I updated this and hey presto every thing is working. A painful way to learn about STP priority!

I would have thought unifi had a bit more intelligence and could detect / warn about such issues.