My question: I also read somewhere that the command to power cycle is sent from the controller and NOT internally within the device nor the Access Point. This is the only reason I can attribute to this not ever power cycling.

Is the reason b/c the controller is cloud-based and this not only requires the Access Point but also some local controller as well?

First I’ll copy the full list from the store page:

And now that’s look at it closely. What do all of these entries have in common? First, they include something that provide WiFi (either an access point, or the Dream Machine which has an internal AP). This is for the USP-Plug to connect to the network. Second, every row includes a Unifi Router of some sort - either a Dream Machine model, or the old USG’s. The detection of internet connectivity, and the command to cycle the port, actually happens on the Unifi router device. At this point, I’m guessing that you don’t have a USG (you already said you don’t have a UDM).

Thank you for clarifying that. I was confused by the instruction documentation link. On page two of the PDF. Link and screenshot below. Since I had an Access Point I thought I met the requirements. Boy do I feel dumb

I had actually assumed that the device itself handled the detection of the internet connectivity and started a timer on device until a power cycle; all on the device itself (it does flash once internet drops so the device does detect loss of internet). It wasn’t until I researched why it wouldn’t work until I read on an obscure post somewhere that the controller may be what sends the command to power cycle. As long as knew with some level of certainty that to be the case I know it would never work with a cloud hosted controller. And you answered my question.

It just seems to me the functionality should have been designed to be on the plug itself and not require a local controller. Even if not on the plug itself maybe have a commend sent to from the Access Point since it is the only requirement according to what I read on the documentation. Especially with the popularity of cloud hosting your UniFi Controller on services such as Hostify. 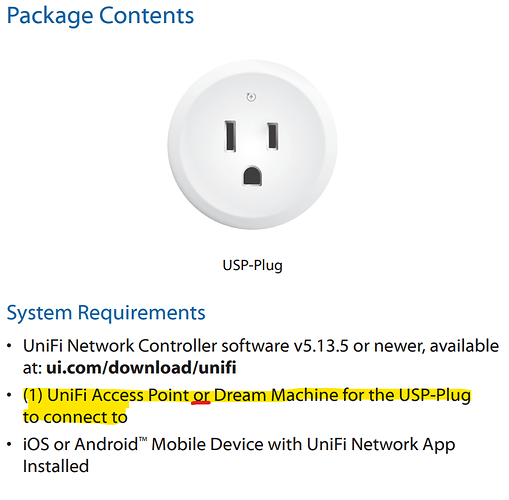 If I remember correctly, during beta testing the device itself did run the offline restart timer, but being a microcontroller device connected over wifi, there was a lot of reports of false negatives causing the modem to be restarted. The change in behavior may not have made it into the packaging and quick start guide. Oftentimes the UI Store page is the only thing that gets these updates.

Technically it still doesn’t require a local controller - the USG after all does not run a controller. A Unifi controller never does internet connectivity testing itself, along with speed testing, precisely because it can be remote from the router appliance.