Been trying to get some VLANs working in the new unifi controller update Version 2.0.24.

On that system every VLAN is going to the Unifi controller to WIFI and will not get assigned a ip from the DHCP server. So I took a break because this is pretty easy stuff and was getting frustrated.

This morning I am sitting here in my office and I have a VLAN for my IOT going out to unifi for my IOT devices, a VLAN for my guest network, and I have another one for data where my server lives not connected to unifi. The controller is also Version 2.0.24. So I set up a wireless network in Unifi and same exact thing I can not get an ip address.

Has anyone seen this? Basically old VLANs working, new VLANs not working.

Did you assign a network to the SSID? They changed how the VLANs were assigned somewhat recently.

I did doesn’t seem to be working for me. Other 2 VLANs that I made years ago working fine, I have tripled check against those to this one and everything seems to be the same. Not sure what I am doing wrong here, besides getting old.

What are your Unifi access point(s) connected to? (a Unifi switch or something else?) I would verify that the switch port(s) are configured to pass VLAN 88 traffic.

My APs are all connected to various Unifi switches. The ports are set to all.

You say all VLANs are going (trunked) to the unifi controller - but the controller doesn’t do any networking. It should just be on a single vlan / network segment. It just pushes configs to devices.

Are these VLANs defined in pfsense, or are they just network interfaces connected to a port with a default vlan set?

Thank you for the help.

I ssh into my homes AP and found exactly what you are talking about vwire3.10 vwire3.20 . So it seems like everything at my home office is working fine. So switching gears to the original problem not my home office. So back to this (trying not to be confusing).

"Been trying to get some VLANs working in the new unifi controller update Version 2.0.24.

On that system every VLAN is going to the Unifi controller to WIFI and will not get assigned a ip from the DHCP server. So I took a break because this is pretty easy stuff and was getting frustrated."

I did as you suggested in shh into a AP and ran “ifconfig” and got very different results.
vlan tags are 10 and 20

A couple of questions here based on the above

Unifi is on 5.x.x or 6.x.x for anything modern, and my AP firmware is showing in the 4.x.x or 5.x.x with my system. Based on this, can you confirm this is the correct version and you’re referring to the Unifi Controller software?

I did as you suggested in shh into a AP and ran “ifconfig” and got very different results.
vlan tags are 10 and 20

What models of Unifi AP are these? My flex HD looks similar with rai instead of vwire.

Based on the .10 and .20 appended to the interface names, it looks like the VLANs are getting added to the AP. If you connect to the SSID and manually set the IP to the correct range for that VLAN, can you pint the gateway? If you run wireshark do you see ARP or DHCP traffic?

That was from the UAP-IW-HD, sorry again, didn’t realize they would be different.

Just did a UAP-AC-Pro and got

If you check the AP → Details → WLANS do you see the data SSID? Should look like the below: 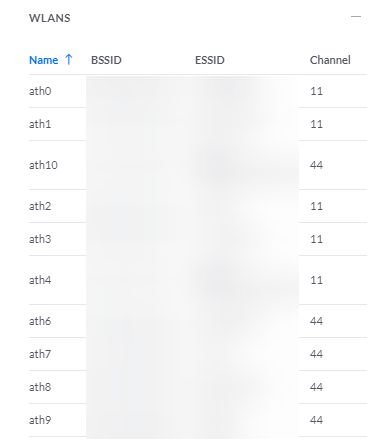 Have you configured the Networks in Unifi and assigned the VLANs to those networks? You show an example of the wireless new=twork with a SSID of “data” being connected to the Network “Data”. Do you have a VLAN assigned to the “Data” network? How about for the other VLANS?

Based on this image they posted I think so

Then Pfsense is not setup correctly. VLAN 88 assigned to the interface? DHCP turned on for the VLAN 88 subnet? Rules set for VLAN88 to allow it to pass traffic?