I’ve got a network, simplified to what’s shown in the attached drawing. The existing network traffic is on VLAN 20 with management traffic on VLAN 1. I’m using Unifi gen 2 switches – a 48 port and a 16 port switch. (There’s a firewall, too, but that should be irrelevant for my question here)

We’ve got a multi-cast TV setup (internal video feeds from a video switcher to TV’s on campus), and we’ve run into an issue after converting from some older cisco to our unifi switches.

Our network design has us separating this traffic to its own VLAN (vlan 10). However, the unifi switches will not send the multi-cast traffic to another switch. Non-multicast traffic traverses the switches perfectly on the vlan, but the multi-cast does not. My first thought was to disable IGMP snooping, as this should force all multicast to go to all ports on the vlan, but this did not resolve the situation.

Interestingly enough, if I change the vlan to 1, which is the untaggd vlan for the unifi switches, the multi-cast traffic passes perfectly. However, I then run into another issue.

The CPU on the 48 port switch pegs at 100% while the mutlicast traffic is going to the switch. It’s about 60% when the traffic is disabled. The switches are connected with 10Gb SFP+ modules, and I’m running a total bandwidth of about 25M nominal without the multicast, and about 800M with. So traffic volume shouldn’t be an issue.

I’m at a loss as to what I could be doing wrong. The CPU spike is causing other issues, like dropped DHCP request and the cloud key to drop out. I’ve “fixed” this temporarily by limiting multicast to the cloudkey port to 100 packets/sec.

I did not have this issue with the cisco switches. Are there other configuration settings I should check? I’m out of ideas. 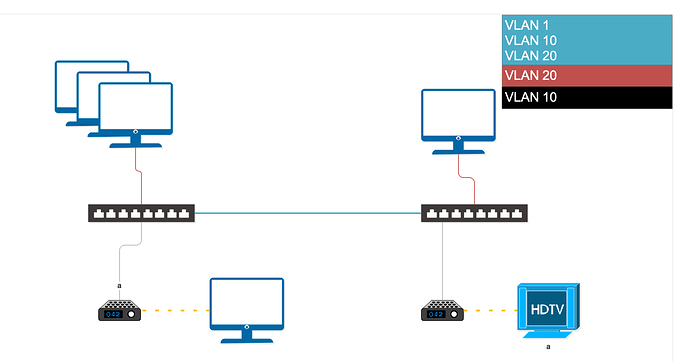 Do you have a device (usually the core switch) which is operating as the IGMP Querrier? (Also known as Active IGMP). IGMP Snooping only works when there is a device (and ONLY one device) that is being the querrier in that VLAN.

There is a forum post with people experiencing some issues with this, and they show the switch commands (when you SSH into a switch) required to check on the IGMP status. This is definitely a case where the Unifi UI has just enough in it to get you in trouble, and just like with CLI-only switches you have to log into them to see what’s going on.

EDIT: I did some more researched because I’ve only used IGMP with true enterprise equipment (Cisco, Aruba, Ruckus, etc) and was curious. This forum post looks like it is helpful also (and is linked from that first I gave)

Ok – I hadn’t seen that post. I only saw the IGMP switch under the network settings of the control panel. When I SSH into the switch, I get a generic terminal that won’t accept many commands – and I get the same seemingly limited terminal when I use the web-based terminal for a device. I’m going to dig into this today and see if I’m missing some type of enable command that gives me the full command set.