Anyone know if this is possible? Clearly the biggest security hole on any LAN is the WPApersonal password. I would love to ditch WPA and only use RADIUS for those needing whole LAN wifi access. But I don’t want to run RADIUS from the cli.
One customer’s setup: Unifi controller in the cloud and site with Unifi APs behind a Netgate 7100.
Is it possible to have RADIUS look to AD for user credentials? I tried following the OpenVPN/Radius vid instructions to set it up, but it ain’t working!

Tom, if this is a thing, a video would be fab!

It’s possible, it’s a bit complex not sure when I will do video on it.

Thanks Tom; is there another method you would prefer?

Yes, that WiFi not be part of any secure networks.

What i have is maybe not what you are looking for but it would be an awesome video for Tom or Jay to make.

My WPA2-Enterprise or WPA2-EAP PEAP network:

I have a pfSense router. I have Freeradius in a Proxmox ct with a MariaDB backend for Radius users and user groups. Every user group is assigned a vlan id. If i put user Bob in Guest 1 group with a surten vlan id he will be put in that vlan wen he logs in on my wifi network.

Any of the WLAN networks have different security rules, limitations and so on tailored for purpose of the users of that WLAN subnet in pfSense.

I use one wifi ssid for these dynamic assigned vlans to users so depending on who is logging in i can assign a vlan to the user by putting this user in one of the user groups i made in de database. The other ssid i use is for the open / captive portal network WLAN1.

The connections with the Freeradius server is over a TLS connection. For this i use a CA and server certificate created in pfSense cert manager. 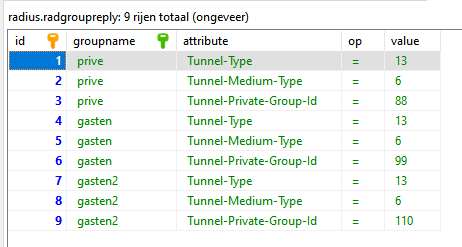