I know this is a pfsense forum so don’t ban me!

Forever I have been using an edge router X in my lab at home speeds were nothing I could complain about being I have 85/85 Verizon FiOS internet. Recently I switched to an edge router POE just came across one and figured I would give it a shot.

Little configuration background…I have the FiOS router which is running the house and that BS (don’t ask). My lab equipment is behind the ER-POE. MGMT is 192.168.5.0/24 and Virtual machines are 192.168.90.0/24. I have a Plex/Samba server sitting on the home side at 192.168.1.240. So when I have a virtual machine on the MGMT 5.X network I can copy full speed from the samba server to the vm…when I move that VM into the VM network 90.X I start getting slowwwww speeds and CPU is pegged on the edge router. (see picture)

The ER-POE is configured in the LAN+2LAN or whatever they call it so I have bridged ports. Switch0 is 192.168.5.0 and a vlan on that switch is VLAN90 192.168.90.0. I know on the ER-X I enabled hardware offloading and that improved overall performance but it doesn’t seem to be possible on the ER-POE. 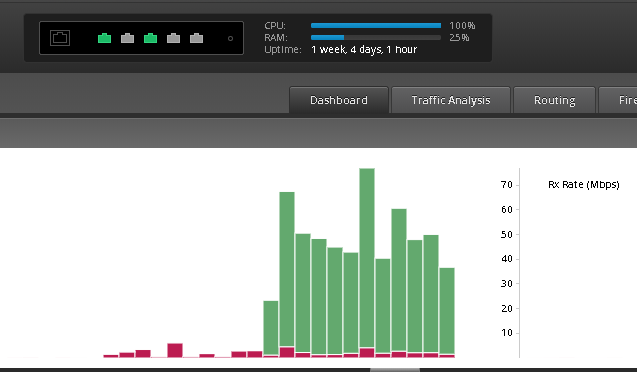 Honestly, I don’t think this is a pfSense forum, this is a high level IT forum with intelligent and friendly people behind it.

You’re better served on this question by Tom or someone who runs Edge routers on the daily. If I was to guess, I’d say it’s a routing issue somewhere though.

Not only a pfsense forum, I life a few other fiewalls as well.

But I do not work a lot with the edge routers. Unless someone in here has a better answer the Ubiquiti forums might be more help. I do know in their documentation they show a separate HW offload option for VLAN’s, hope that helps.

… was not aware of the different offloading for vlans. Seems to have done the trick…dam thing runs so hot that 100% cpu time was going to be a problem eventually.