i did set up syncthing on truenas acording to Toms awsome video, though i cant get the permissions to work it looks like. when i do try to create or sync in a folder in the sync thing on truenas it just say “Failed to create folder root directory mkdir /folder: permission denied.”

i´v been over the video several times, and all the settings, but can´t figure out what i am doing wrong, 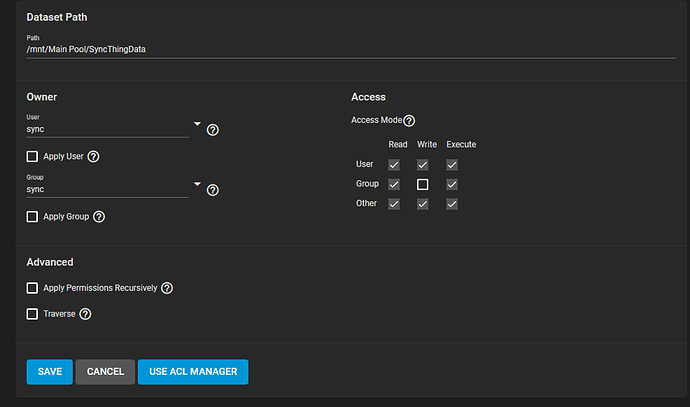 I am having some of the same issues, I tried putting my users Home directory to the syncthing folder and still getting rejected. Let me know if you figure this out I have 15TB of data I need to more before I wipe a raid 10 to expand it.

hmm ok, it did work, though i had to add the permissions via SSH, i had tried that several times in UI of truenas but the group still did not have permission to write.

So I need to give permissions to /mnt/PlexNAS/iocage/jails/syncthing/ for user sync?

What i did was add permission to the group for the syncthing folder equal to your yes, then i did go in to the UI of truenas and just because did add permissions again recursively to the dataset under pools. i am 100% sure i did try this several times in the UI before but for some reason it did work when i did it this way. don´t know if it is a bug or just me missing something. but i did destroy the jail and plugin and did try it two times with the same result before i did get it to work thanks to Tom.
also, i am not 100% sure i have made everything up to safe standards regarding the permissions right now but it does not madder because it is just my home system with no internet access.

looks like I did the same thing but still getting rejected

then i have no ideah, go over Toms video step by step and se if you can get it to work.

I redid it a few times, I will try it again.

Yeah still not working, after the reattempt the admin portal is not even loading so going to wipe and start over.

After some reading looks like I need to reinstall to 12.0.U2.1