I did some research on TrueNAS M series and TrueNAS R series hybrid storage solutions. The TrueNAS M series is an true enterprise SAN, based on high bandwidth Ethernet, Fiber Channel connectivity and availabity of redudant controllers . The TrueNAS R series is an enterprise NAS becuase it lacks Fiber Channel connectivity and availabity of redudant controllers. I am looking for a replacement for a Barracuda 890 appliance to provide storage for on-prem backups with a 1-3 day retention before archiving to a cloud provider. Is there anyone who disagrees that the R20 equipped with enterprise NAS quality drives will fill this need?

I have never used the Barracuda products but we are a reseller for IX Systems and all of their offerings are very reliable.

Since this is just for backups, it seems like you could live with a failure for a day or two, is this correct?

If so, the not having redundant controllers is fine.

All that said, if you had a second computer chassis and mainboard, you could probably have the storage back up and running is a few hours. Tom has a video of moving storage drives between chassis on the “older” Freenas which might prove out your desire to save some money with the R version. ix systems use good server hardware, so the expectation of short life is fairly low and the R is probably a good choice. Just stick it on a UPS if your stuff isn’t already on a UPS and generator.

The question on being able to tolerate the loss of a single controller depends on how long the outage is. If I miss one day, that’s okay. A week…not so much. But it gives me something additional to think about.

The trouble with Barracuda is the pricing structure. They have an instant replacement (IR) service plan that provides a replacement box in the case of a hardware failure. When you pay for the IR service for four years, they give you an automatic hardware refresh. So that tells you a bit on how much the support/maintenance costs are. So it’s really Backup As A Service (BAAS) that gives you total control over what gets backed up and how long it’s retained. Overall, it’s a good solution, albeit expensive.

As to the quality of the gear, software and support, it’s good because it’s dependable.

How does Synology gear stack up against IX Systems from a price perspective?

If you build yourself, you can buy a Supermicro overnight warranty replacement option. I would guess that you can buy the same from ix systems. And that overnight would be for any part of the system.

If the power supplies blow up, you could lose both main boards in the M system, or all the drives, etc. If you carry failure modes far enough, the entire thing will be consumed in a ball of fire and 100% unrecoverable. At that point, having redundant main boards is of no value. What level of failure mode are you willing to use for a backup machine. Is it better to have multiple cheap machines that can back up the backup? Maybe a SSD based for primary and a spinning based for secondary? And put the secondary in another building or different part of the building? Maybe just 2 spinning devices in different parts of the building? Depends on the amount of data to be stored and the speed required to retrieve it.

Ok Synology may be cheeper but you will give upthe robustness of ZFS that is superior to BTRFS used by Synology. ZFS is more mature and has features that BTRFS doesn’t.

You could buy an R series and the build a TrueNAS core system as a backup to the R and replicate or use Syncthing to the Core box.

I will let you know tomorrow. No doubt the MiniXL+ is going to be the less expensive.
The Mini XL+ will be some ware around $ 5K to $ 5.5K go to Https://truenas.com you can configure on line but please buy from a reseller and not Amazon.

Are those 14TB drives CMR/PMR or SMR, it has been shown that SMR do not work well with ZFS and resilvering drives. 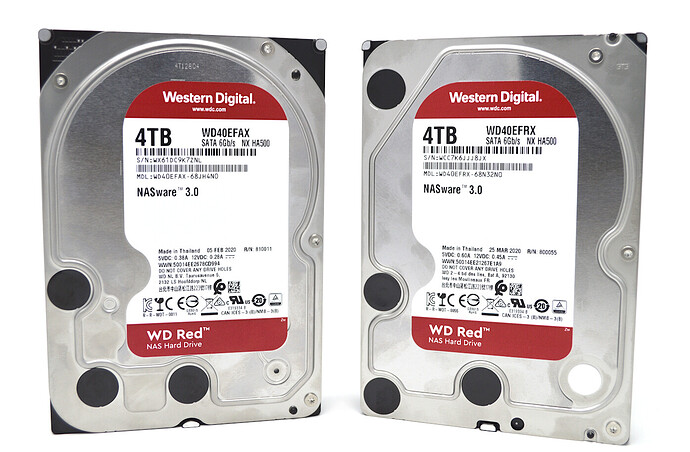 We tested WD Red SMR v CMR drives to see if there was indeed a significant impact with the change. We found SMR can put data at risk 13-16x longer than CMR

IxSystems has the CMR drives.

OP: For quotes regarding how much would cost an iXsystem NAS vs another, either contact Tom or iXsystem directly - Tom will also be able to assist you more personnaly as this is his business.

There are things to think about when you go with TrueNAS that stuff from QNAP, Barracuda or Synology discard. TrueNAS maybe “just a NAS”, but it is much much more reliable and feature rich than anything else on the market - and at a much lower cost than EMC that does’t do anything better. I’ve ask a quote 2 years ago fomr iXsystems for a 250k$ NAS that would be able to do all what we wanted (direct vm storage via NFS, backup repository, user data, etc) and being redundant over that and all this over copper (10GE) and fiber (40Gbps).
You can’t go wrong with TrueNAS.

When I priced out a system from ix systems, I found that they were within a small amount of money for what it would cost to build my own server. They have good prices on server and drives,

I have similar experience, i used an r720xd with ssd drives. Installed 2 hba’s into 2 different brocade switches. Then replaced the internal 4 1gb ports with 2 1gb for admin management and 2 10gb redundant connections for usere to connect to their shares. I do 4 hour snap shots during the day (protect against ransomware) then at night i use backup exec to pull that data over to another server which goes to tape after 1-3 days. My TrueNAS server is the heart of this company it connects users to the database server via redundant switches as well as redundant 10gb switches. Everything but the hardware on the server is redundant. Im working on a solution for that. I have another server same setup in a co-loc. For DR, every week i replicate the data (changes only) to the DR server and a dell 910 running copies of every workstation and internal server as VMs. I only need to do a DNS change at godaddy and i keep my ttl low for faster dns records to update to core internet servers like DC’s ,API, etc… all users just connect via rdp. So theres an idea on how i did it with my own hardware and it works very well. Right now at the office i have redundant VM host servers in the domain spliting my dc between machines, and other servers the company has.

Keep in mind always be redundant, i have a pretty powerful VM host machines with 512 gb memory so im considering as a backup to a server hardware failure using a vm i built and if the fiber connection to the vm doesn’t wanna work i can use dual 10gb connections over the iscsi i connected together. I do have another r720xd in the rack that i could switch drives and hba’s over and upload my backup config which includes encryption keys. So i assume 2 hours running on the VM till im back on stable hardware.

But TrueNAS makes it very easy to recover ur server and the VM has alot of power to hold the traffic for days. Less than 100 users and thers no video editing or heavy load on the database its basically all text documents. I have a powershell script that simply monitors the host server and in the event it goes down for more than 30 seconds it switches over internal DNS records on the DC’s and secondaries used as login servers. Solarwinds then alertsvme to the failure and i can begin to ensure thers access to the data and users are working. But when i get time ill play with setting up my backup TrueNAS vm on fiber instead of iscsi.

Hope this helps but honestly after just short of 2 years i have only had a few issues with it staying in the Domain. We had a connection when we purchased all the ssd drives @ basically half price. they are more expensive now for the ssme drives. Hard to get them to budget this since its been so stable for a long time. Keep in mind for ur budget (ABR) always be redundant! Hell the servers r720xd were the cheapest parts we bought in the whole setup. I also do not run VMs on TrueNAS thats on two other seperate servers. Only database traffic and it actually is overkill for the oracle database server. Which uses the ssd drives on TrueNAS. Very inexpensive compared to an older EMC CLariion or VNX…