I have the strangest network issue that I cannot seem to fix after many many hours of debugging. First (the relevant part of) my setup:

The network is segmented with VLAN’s.

Now the problem. When I do a pcap (Promiscuous mode) in pfSense on the LAN interface (which is the parent interface of all the VLANs) I get many many TCP retransmission, TCO Out-of-order and TCP Dup ACKs.

The problem happens across many devices (all?) but to focus on just 2 machines and track down the issue (both are Debian based VM’s, and both are in a different VLAN such that data is forced to route over pfSense, note that all data is flowing over a virtual/SW switch in ESXi). I logged data in one virtual machine and in pfSense simultaneously and tracked the packets down in Wireshark and “synced” them to show them side by side: 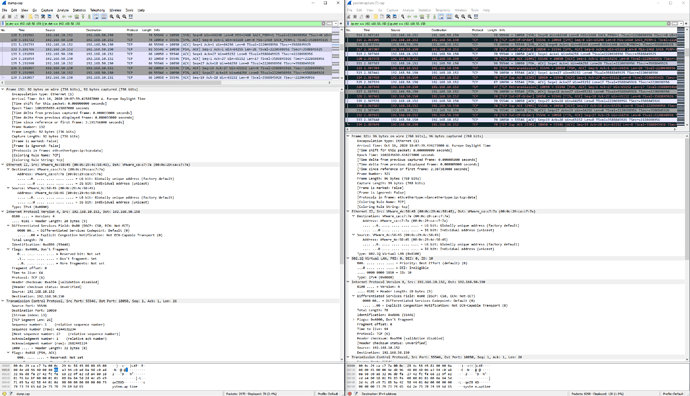 As you can see all data inside one of the VM’s is perfectly fine. Also using ethtool (in that same VM) shows no issues at all. No even a dropped packet.

While doing a lot a reading I tried things like:

All without any success nor improvement.

Hence I’m out of options. Since no networking HW seems to be involved (vSwitch) I suspect an issue in the hypervisor config or VM’s.

I really hope somebody can help. Maybe the packet capture screenshot gives a hint?

I seem to have the exact same problem. Did you find any solution??

I switched to Proxmox, which seemed to solve it. Although not 100% sure ESXi was the problem.