I’m looking at trying to get ubiquiti gear into a school that I am providing a bit of consultancy for. Link redundancy is a requirement and normally I would do this by either using a “proper” chassis switch or by stacking individual switches from someone like HP.

I wondered if it was possible to stack unifi switches so that we could, for example, run 2 fiber links to two separate physical switches but still configure LACP. I guess I could use STP and just have one of the links down until a failure occurs but that would not be as good.

Looking at 16 fiber runs (two pairs to 8 locations) + 10g uplinks to servers (yet to be surveyed) at least another 4 links so thinking 4 USW-Aggregation would do the job but the auto “fix” if one unit fails is a requirement that I’m not sure they will achieve.

Holy crap… I just found this; 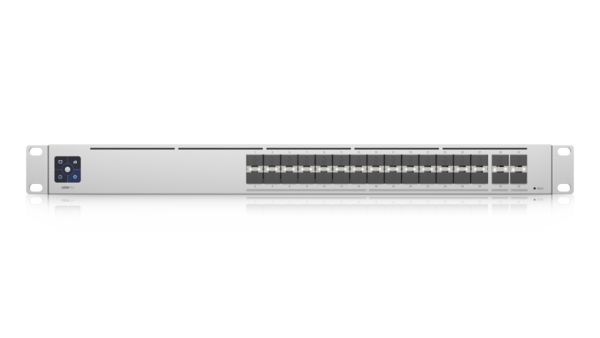 USW-Aggregation-Pro is a Fully Managed Layer 3 Switch, with (4) 25G SFP28 Ports and (28) 10G SFP+ Ports. Featuring a 1.3” touchscreen, it supports high-bandwidth links to provide link aggregation for higher capacity and increased availability. The...

That I am aware of, UniFi does not support actual switch “Stacking” like other brands such as Cisco

That’s what I thought… Would you be happy relying on STP for failover? I always feel like it’s kinda cheating.

With RSTP (which Unifi has) then using it for failover isn’t quite cheating. But you would be more bandwidth limited than if you had a true stack or chassis.
By the way, the cheapest stackable switches, aside from asian budget brands, is Ruckus ICX switches. You just need the ports to be licensed for 10Gb to be able to stack on SFP+. A good distributor can make sure you’re getting EDU pricing, which for Ruckus is a significant discount from what I’ve heard.

I think I will end up falling back on HP on the grounds I know it’s good kit and I know them. I don’t think Ruckus is bad but I don’t know their kit and don’t want to learn at a new site!

I should also probably go find the feature request list for unifi and add my +1 to the stacking one that’s must surely be there already.

Unfortunately adding stacking isn’t just a feature they can add if they didn’t already have it in their plans to do so (if the hardware wasn’t architected for it). and since Ubiquiti tends to over-promise on features (or take many years to deliver them) I’m sure we would have heard that Stacking would be “coming in a future software release” when the product was announced, like Layer 3 Switching with the Gen 2 Pro switches.

I do like HP also, or Aruba as it is now, those are actually my favorite switches CLI-wise. I just remember that at least for hospitality pricing, the cheapest stacked pair of 2930F’s was significantly more than the stacked pair of ICX7150’s. And if you know HPE/Aruba CLI then Ruckus CLI isn’t very far off. Ruckus is closest to Aruba than anything else.

IMO, stacking sort of…isn’t as popular anymore.
At least not in SMB…even towards the “M” in SMB. We do quite a few schools, and we put a “TOR” switch in the stack. TOR = Top Of the Rack.
You link your gateway to this. And each switch…you uplink into it. Instead of cascading up into each other. So say, you have your TOR, and under it…6x switches, each switch has a direct link into the TOR. Commonly we use a 10 gig uplink here.

Yeah, I guess the benifit of the unifi over meraki / HP / cisco is you can but 2 of the unifi for the same price. You still have to choose between having LACP and more bandwidth but some downtime or STP no downtime but reduced bandwidth.

For me it’s probably worth the small amount of downtime but it looks like the DFE (UK Department for Education) stipulate failover as a requirement for new builds.