Restart and update to stay in Windows Support

Hi,
A user reported a 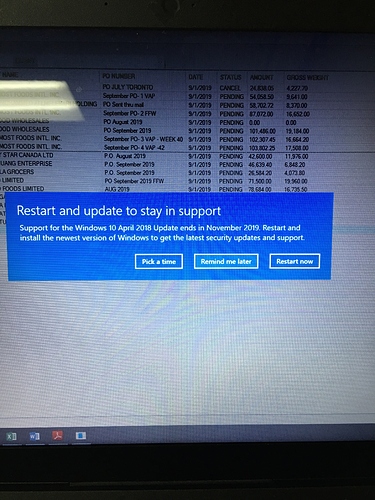 2019-08-283024×4032 3.89 MB
request to update his windows 10… And we suggested for him to save his work and plugged his laptop but after the restart happens his files were gone… Anyone experience this problem updating windows 10? I’m trying to retrieve his files but I’m just shocked at what happened… Microsoft should at-least notify the user if the files will be deleted…
SandboxGeneral August 29, 2019, 3:19pm #2

Their personal files shouldn’t have been deleted/removed during an update.

That’s kind of odd. I’ve had Windows updates do some weird and annoying things to me in the past, but I’ve never lost personal files before.

Were you able to get them back?

They’ve had issues with “Updates” destroying user data during the update/upgrade process with Windows 10. Once Windows 7 truly hits its EOL, there will be Many people moving to Linux I believe, or hacking 7 like they were with XP.

Microsoft will never publish “this may delete all your stuff”, as nobody in their right mind, would choose to allow the update. Sadly, they’ve more or less, forced updates upon all W10 systems, unless you nerd out and kill all the evil stuff.

Yes, but not all files were retrieved…

We will now be very strict about updates… Some of our managers want to be the admin but I guess we need to limit them to protect them.

Do you know which version of Windows they were on at the time it upgraded and deleted the files?

I was just updating an old computer and put Windows back on it from the Dell restore ISO and was reading about Windows 10 versioning on Wikipedia while I waited (and waited and waited).

I saw Microsoft had this very issue with version 1809 in late October 2018 and didn’t get it resolved until mid-November.

The Windows 10 April 2018 Update (also known as version 1803 and codenamed "Redstone 4") is the fifth major update to Windows 10 and the fourth in a series of updates under the Redstone codenames. It carries the build number 10.0.17134. The first preview was released to Insiders on August 31, 2017. The final release was made available to Windows Insiders on April 16, 2018, followed by a public release on April 30, and began to roll out on May 8.

I’ve been using Linux for so long now that I hadn’t even heard about the file deletion bug until just now.

The only reason I’m loading Windows on this particular machine is to play some games again once in a while. I just built myself a new machine and moved my stuff from that old computer over to it.

Hi sir,
I think the version is from April 2018 to November 2018… And said that the support will stopped… It happened again yesterday the user actually choose to update later but it still restarted and update itself… Again all files were deleted but installed application is still there. If I could just force users to use Linux… but I can’t

As nice as that would be, we can’t make anyone switch platforms. Most of the time people just don’t care to learn something new and stick to what they’re used to. Another part is that sometimes people are locked into some proprietary software where there is no alternative.

But what we can do is help them create and maintain a regular backup routine for their files. That way when Windows does delete their stuff, they can get it back much easier.

Does this client of yours have a backup solution in place?

We at-least encourage them to backup their files on Drive