Question : Cable runs or P2P for a summerhouse (UK)

Getting some really useful advice from this forum and so i’d like to put a post out there for people to give me their opinions on how they would tackle this scenario.

I have a brick built 1970’s house, with exterior insulation and PCV skin covering 98% of the external walls. It also has a 1.5ft brick boarder around the base. The house has two interior unused chimney stacks running through the floors on each side, and out through the roof line. The image below is not to scale obv, but you get the idea of the layout 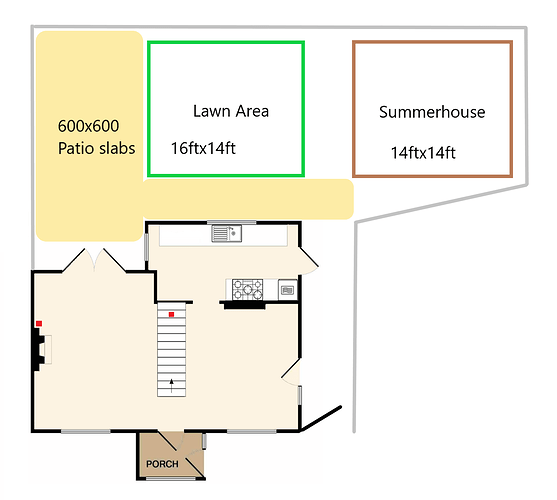 I already have CAT6a running through the house to every room, these break out in to Flex Mini switches driven by PoE from a Gen2 Pro 24. this includes 2x cables down through the furthest chimney stack to the lounge/TV room. The two runs shown in red are current and the far left has a double run already.

The summer house will soon be built and i want network out there. I already have two AC Pro units mounted in the attic on the roof line of the house, and these provide wifi coverage outside just fine. However im a big believer in having cabled connections always.

From just outside the doors where the far left red square is, we already have an exterior armoured power cable running the wall line up to the top fence and all the way across to the top left of the summerhouse border so power is no issue inside the summerhouse. This is from the internal distribution board and has its own circuit.

In the summer house im looking to put in at least a desk for me to work, 1x G4 Dome, and some PoE external lights (Unifi Protect smart flood light)

The question is this. How would you run connections out to the summerhouse cable wise? Would you run a single CAT6a exterior rated cable from the inside point. Would you run multiple cables? Pt2Pt wireless to another Unifi switch industrial maybe. Your thoughts on how to achieve this would be appreciated.

If you can hard wire the external summer house by using outdoor rated cable via either an underground conduit or via overhears that would be the best. A single Cat6A can handle 10G do you need more speed? Running two or more does not add significant cost if done while running the first line.

Hi @LTS_Tom thanks for your reply, still think its kinda neat how involved you are in these forums and always one of the first to comment.

I have nothing at home that requires 10G currently. The only stuff i own that has it are my Synology and the switches themselves.
If cable is the best option and running one cable, why not run more! IYO is it best to have a single unterminated cable from switch to summerhouse, or would you terminate on a faceplate inside the house and run the exterior rated cables from there?

Thanks once again for all your comments and opinions.

For these installs we always run 2 cables terminated each end to wall boxes.
You can pop a switch in summerhouse if needed or you may find use for the Unifi InWall which as a few ethernet ports on them as well.

As far as termination in house, pop it near where your current patch and switching is.

I’d buy a spool of direct burial cable and either run it in conduit or bury it directly. The cost of a spool compared to the cost of building the “addition” will be very small. That would let you run several cables and give you the backup needed if a cable fails.

Direct burial should be OK for sunlight exposed cables, but I’m not absolutely positive on this. Generally speaking, not a fan of running this type of thing on the surface, any idiot can come through and slice it and then your security is down.

I’d bury the power as well, it’s much safer this way.

Much as @innermotion and @Greg_E have said, I would only add terminate the end with a punch down port. I’ve used these in my house and had no issues.

You ought to consider your security, any old dope would be able to access your network if you are dishing out IP addresses !