Well, being lock-down, due to the pandemic, will give ya some time to mess around. I always found my Protectli Box to be a bit warm; the sensors indicate that it usually runs between 46C & 49C, which is about 114F to 120F.

So, I grabbed an old case fan, spliced up the power cable to a USB cable, and plugged it in. The configuration of it in the picture has dropped the temperature down to 36C to 37C, which is 96F to 98F. So a pretty decent drop in temps.

Unfortunately, I have not noticed any increase in performance. At best, web-pages load all at once rather than in piecemeal. Speedtest pings have not changed at all. Yet, the box is now cool to the touch, so it may help with its longevity.

Just thought I would share. Have a great weekend, folks. 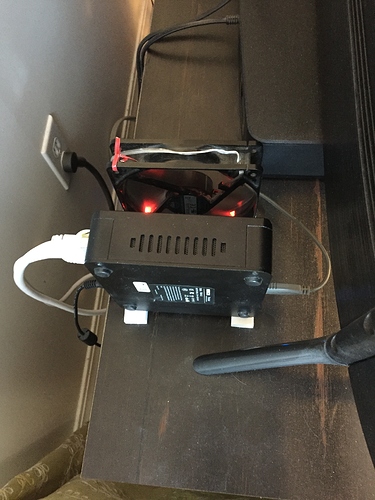 Yea the protectli’s run hot. Hot enough I can’t put my hand on them. Should be a fan inside them IMO

Yeah, it is kind of shocking how hot it gets and I am not even running PFSense that hard; basic home use with two users.

What is the model of the protectli device you have. I was planning to buy one. And thank you so much for sharing this.

This is the one I have (pic) - https://protectli.com/product/fw4a/

You’ll need Ram and a mSATA drive, which you can just buy when you purchase the unit. I had some old stuff (4GB Ram / 90G mSATA drive) sitting around so I just got a bare bones unit. 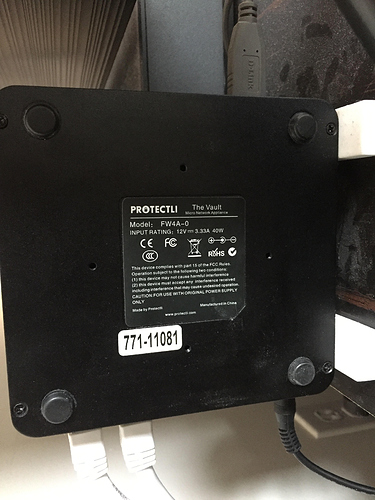 thanks for the info.

At the price, would an HP T620 plus be a better choice? I got mine on ebay with a 4 port Intel card (em version) for around $160 shipped. Came with 4GB RAM and a 16GB SATA based card. Running with the full offloading offered through pfSense and it seems nice and fast. Cleared up a couple of issues I was seeing with my other box and the USB adapter for second NIC. This is the place I bought mine from https://www.ebay.com/itm/HP-T620-PLUS-Thin-Client-Quad-Core-GX-420CA-16-4-Intel-Pro1000-pfSense-ready/202967645071?hash=item2f41d07b8f:g:LOgAAOSwfOBeM6ja

Was clean enough but I still wiped out the fan blades to remove the last of the dust. Yes it is used from about 2012 to 2015 era, but working well right now. If you want extra storage inside, find one of the revision A boxes, they have an extra mPCIe connector inside, but I forget which key it is so it might only be another SATA not an NVME slot. Some have connections and a mount for 2.5 inch drives as well.

I have the 6-port Protectli i3 and it runs very cool. CPU is at 40-43C and the heat sinks aren’t warn at all. This runs a decent size network perfectly with multiple VLANS and VPN. CPU might go to 3% but almost immediately drops back to 0-1%.

Yes, the i3 would certainly be superior to mine. I imagine that is why it is emitting less heat, too. I suspect it would not be that much work for an i3 to do with what we are asking it to do.

I imagine I will build another pfSense box at some point and I’ll most likely go with a more powerful cpu as well. It is good to know the Protectli i3 is a legitimate option.

I thought of something else that might help your heat issue. If you are running 2.4.5, try activating PowerD. PowerD is located in System, Advanced, Misc. Scroll down to PowerD and enable it. I use it in the Hiadaptive mode. Then go back to the main screen and in the area that shows the CPU speed, a line will pop in showing a lower cpu speed when the cpu can be throttled down. I have run Pfsense with and without PowerD and have seen no performance impact.

FYI, the line showing slower CPU speed only shows when the CPU is throttled back. When running at full speed, the line disappears. Hopefully this might drop the temp down in low usage conditions and you might even save a watt or so.

@jeff3820 – I’m assuming you talking about pfsense 2.4.5. Unfortunately on my protectli I have pfsense virtualized with xcp-ng on the unit. I run a few more VM’s such as ubuntu/xenorchestra as well on the device.