Ran into a problem to SSH into my local LAN-connected server across VLAN as setup below: 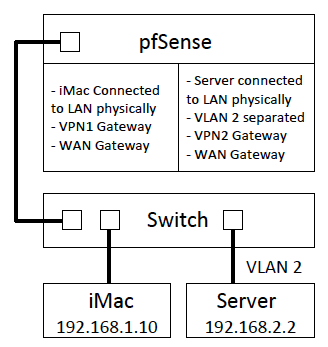 I do have both computers route through different VPN connections. For some reason I just can’t get SSH running between the two.

I don’t think I need port forwarding as I can Test Port on pfSense to reach the server via LAN interface as source. In addition, I can’t ping my server as well.

Any help is greatly appreciated! Thanks.

You have to have rules that allow the traffic to pass between the networks.

And the ICMP protocol if you want to ping.

Thanks Tom. Could you please elaborate? Where should the specific rules reside?

The rules currently deployed in my firewall:

Do I need to be more specific to set up rules under LAN and VLAN2 to allow SSH traffic?

By the way, am I correct that this doesn’t require port forwarding even though they are connected to different VPN gateways?

Thanks neogrid. I don’t know what the protocol is about, I will look it up.

Does the iMac need to SSH to the server? If so, go to your VLAN1 interface and create a rule for TCP traffic to source from the VLAN1 net to reach the VLAN2 net or specific address of the server.

The rules currently deployed in my firewall:

I am really confused here …

Can you provide a screenshot of the rules for both interfaces? 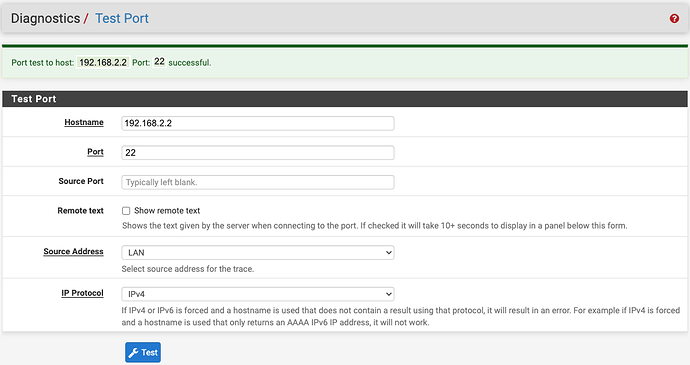 The part I am confused is why Test Port to server is successful from LAN but iMac can’t connect to the server.

BTW, there are no rules under both SERVERVIAVPN & DEVICESVIAVPN interfaces.

Thanks a lot for your help.

I think it is the server. I would put another device on the same network and see if it works. If it doesn’t, you know it is the server since local traffic wouldn’t have to pass through the firewall.

I have removed VLAN and moved server to be on the same network as iMac. As a result, everything works fine.

This has left me very confused …

Any help is greatly appreciated! Thanks.

It’s definitely the firewall. First, try disabling the second rule on the SERVER interface where you are blocking SERVER net from reaching LAN net. If it has an issue try to add a rule at the top on the LAN interface for IPv4 traffic from LAN net to SERVER net and let’s see what happens. Also, when you move the server back, make sure it can ping the IP of the interface. You may need to add a rule for ICMP from each respective network.

I have gone back to to the drawing board and built set my firewall from scratch. I noticed that I can no longer connect to Server as soon as OpenVPN service is up and running.

I am not sure if anyone else has similar problem.