@LTS_Tom Nasty surprise after installing the latest kernel and video driver updates 3/30/2021 for Pop OS 20.10. After reboot, the system hung.

Able to work around the issue at the moment by pressing the space bar at boot up and selecting the “Pop!_OS (Pop_OS-oldkern.conf)”

At this point wondering if this is a hardware issue of either a failure or incompatibility with the video drivers or the kernel. I think I read somewhere the new video drivers were not kernel drivers but “live” in the user space.

Trying to get my hands on another E5470 to do a side-by-side compare with same hardware.

Doesn’t seem to be any posts in other well traveled forums on the subject related to the recent update and Pop OS. Anyone with any thoughts, input or anything, let me know and thanks in advance!

Will post updates if I figure out a resolution

How to repair and reinstall the bootloader.

Systemd-boot not GRUB for Pop OS

Update: Followed the steps for repairing systemd-boot for encrypted SSD drives. All the repair commands executed without error. Rebooted, system hung at a later time with the same error. Support ticket opened

Other notes: Researching the crash, it seems the system hang happens at or before detection of the video subsystem. Both of the E5470 Latitudes tested contain Intel Skylake GT2 HD 520 integrated graphics.

Looks like it’s not just my system. Looks like the issue is rising up in the number of incidents 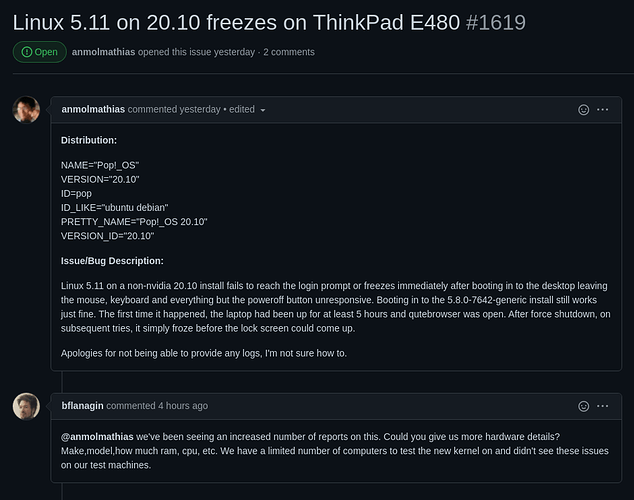 Will follow up with testing on another affected E5470 and also see if LTS 20.04 is fixed too.

Way to go System 76 and the upstream Ubuntu team!