I was thinking of getting a negate pfsense firewall but have Verizon Fios. How would I hook it up with the router I already have.

I have never used FIOS but the best solution would be to put the FIOS equipment in bridge mode so it can had off the IP and routing to the pfsense system.

Would I be able to still use the Wireless in bridge mode?

I had Fios when I lived in Texas. The ONT on the side of my house had an Ethernet jack that went to the Fios router. I just took that Ethernet straight into my (at the time) Ubiquiti USG in DHCP mode and got a Public IP direct to the USG with nothing in between. My configuration may have been different than yours, so your mileage may vary.

Would I be able to still use the Wireless in bridge mode?

Probably not, once in bridge mode you would likely need to use another device behind the pfsense

My step son has FiOS, once it comes into the house you just have an ethernet jack, put any firewall and access point you want after it. That’s what we did.

With Verizon Fios when you want to use your own router/firewall (pfsense) you take the ethernet cable that goes from the Verizon ONT device (device that has the fiber cable from Verizon going into it) and plug the ethernet into your router/firewall. You can remove the Verizon router and send it back to Verizon to remove the monthly router rental fee. For WiFi I’d go get a Unifi AP or another WiFi access point of your choosing and use that for WiFi access. If you need WiFi from the Verizon router still you may be able to plug its LAN port into the inside of your pfsense device and turn DHCP server off on the Verizon router and give it a static IP that makes it accessible on your LAN (just make sure the IP doesn’t conflict with what you assign to your pfsense)

Something of note: If you are using FIOS for a TV service with Verizon’s own DVRs, you will need to keep Verizon’s router somewhere on your network and connected to COAX. Verizon’s DVRs get their guide data from the internet using their router.

There are ways around this, but they require some networking fun to make work.

If you are not using FiOS TV, then you should not need their router for anything. 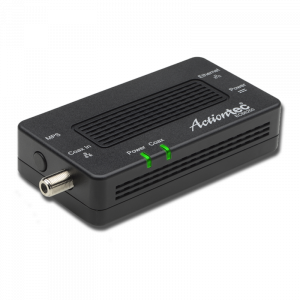 Learn more about Actiontec's award-winning MoCA Network Adapters to give you a high-speed, reliable wired connection to the Internet with running cables.

I used the MOTOROLA MOCA Adapter shown in this video… How to use your own router with Verizon FIOS Internet & TV - YouTube .
The maker of the video is not a Pro but he does do the best job I’ve seen on this issue. I have tested this setup with both pfsense and untangle and it works great! The only thing I’ll add is that only the main STB (Set Top Box) (See this link for differences in Main and Mini boxes Fios Set-top Box & DVR | Verizon TV Support ) has to be on coax (MOCA Adapter). The other mini STB’s can use ethernet or Wifi connections as well as coax. Please note that when removing the Verizon Router from your setup you lose the option for online support from Verizon. Your stuff is your stuff and they don’t support it. If you’re like me and you like to tinker this shouldn’t discourage you from taking control of your network. Verizon will for their part issue a new DHCP-defined IP WAN address everytime you switch or cut off your router. This will happen as well when making changes to things like you’re DNS settings in pfsense or untangle. So far they have issued me about 12 different IP address. They don’t seem to care about that as long as you don’t need support. Some of you out there may be renting your router and wanting to save the monthly fee but I was lucky, they gave me the G3100 router for free with the install. They use refurbs for that the tech has a nice supply of on his truck. I’ll keep it around just incase I need the support. Happy tinkering!

So I currently have Verizon FiOS with their gateway router. We discontinued Fios TV and phone service and now only have internet. Wireless on Gateway router is shut off and I use google mesh behind it on a different network. Google MESH’s WAN is the internal on the gateway router.

Here’s the ask:
If I can actually get rid of the FiOS gateway router and use a pfSense appliance as a firewall in it’s place, do I bridge a port to the Google mesh main puk or do a hop like I do now?

My ONT is Ethernet to the Gateway router now, not MOCA.

Yes, and some ONTs will support fiber to the pfSense, as I have been told.

yes to bridge or yes to route hop?

If I remember correctly, the Fios at my son’s house is a BiDi interface, only a single fiber comes in.

The MoCa adapters are very interesting to me… We have coax cable strung all over campus and might be a way for me to move ethernet places where I don’t/can’t have a fiber. Need to look into that deeper as we have a lot of RG11 and larger hard cable run which may give me higher bitrates. But everything is rated to at least 1ghz on campus and I think much of it is 1.5ghz or 2ghz. MoCa 3.0 at 10gbps would be very useful in my near future.