Aside from price what are the pros and cons?

Basically what I’m trying to setup is a small office network (50 - 100 devices). I’ll probably use Ubiquiti APs (either Pro or HD), I was just debating the hassle of installing pfsense and gathering up hardware and having to manage the network from 2 places, vs EdgeRouter where it won’t be as powerful but may integrate better with the APs.
Also another question are the ports on the EdgeRouter similar to an unmanaged switch or managed one (separate VLANs per port)?

Edgerouter and pfsense both work fine with UniFi AP’s. If you don’t want to pick out hardware, just buy one from Netgate. The Edgerouters are nice but you may find yourself at the command line for some of the advanced configurations. When it comes to features, pfsnense has much more to offer such as IDS/IPS, DNS filtering via pfblocker, GeoIP filtering via pfblocker, captive portal, OpenVPN, Radius Server and a lot more that is not available on the EdgeRouter.

I went edge router at my house for cost. I am happy with the solution as i have only 3 users.

I also dont have many advanced features needed. I use only 3 vlans. The edge router works great with my unifi aps.

The port on the router are like those of a managed switch.

I believe the choice you have will be based on what features you need. If you want more than just basic routing and vlans in addition to having the number of users sited at two locations. Although i have not used pfsense, it seems more feature rich and scaleable and the potential front runner in this case.

You can buy hardware directly from netgate.

You must have an ER-X since you say your ports act like a managed switch.

The biggest issue I have with the ER-X is its lack of anything to report per ip usage. I used to use an ASUS N16 with Shibby Tomato, and it has the per ip stats integrated from the Toastman Tomato build.
Here is an example of interface stats for 24 hours 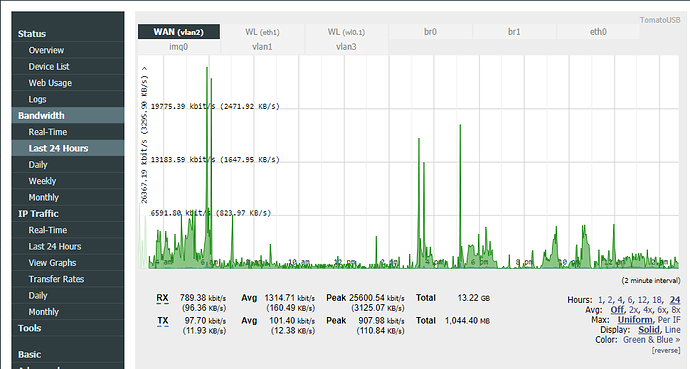 And here is graph for a single IP, but not showing the part with all the device ips.

With pfsense there are other tools to see traffic, like ntopng and pftop. But I don’t think there is anything exactly like what Shibby Tomato provides.

I really wish the edgerouter (or pfSense) had something like this.