All VLAN are created on Pfsense and configured on UNIFI switch.

I have a pfense as router and firewall
w/ POE unifi switch connected via 10G link and also a UDM PRO connected to the switch.

DHCP runs on pfsense and Network controller on UDM PRO with option 53 DHCP.

Any device on my LAN can ping and cast to both Shield and chromecast soundbar when everything is on LAN, but as soon as the devices are moved to a VLAN (both Shield and Soundbar and laptop wired via ethernet) That laptop can ping but cannot cast.

No blocking rules on VLAN.

Holding complicated question for later, but simply put why & how can debug this mystery that devices on LAN can cast but not on any VLAN.

This issue is not yet about cross VLAN casting, but about casting to devices on the same VLAN

I have watched most of @LTS_Tom videos to setup the network.

I don’t have chromecast or similar, but from memory, the avahi package overcomes the cross vlan issue. I thought mdns doesn’t go through the router, hence you can’t see the other vlans, hence the need for avahi. At least that was my sketchy understanding.

I am not yet talking about going across VLAN’s. Just everything on all the same VLAN.

The laptop cannot see or cast to the chromecast devices. But can ping them

how can I check that?

How are these related to wired clients?

The nvidia shield and soundbar are all wired including the laptop. Once they are on the LAN default network they work fine.

Only if I move them all to the IoT network the laptop cannot cast to any of them.

But all these clients are wired!

Can you pls share the screenshot, I can’t seem to find itt

That’s to control the bandwith of the traffic

Those are already disabled

Correct, connected to the same switch

I also have JBL 9.1 soundbar which has a chromecasting abilitty built into it

Also it has something to do with the VLAN’s. When the nvidia shield is moved back to the Allow unifi switch port profile. It pops right away.

If possible can you pls share your firewall rules.

All your devices are on some sort of VLAN? Is that correct.

Can your desktop cast to chromecast?

That’s the problem I have if I move everything over to a VLAN to test(nvidia shield, chromecast soundbar and laptop) I don’t see the cast button

They all get proper ip from dhcp. and I can ping as well. 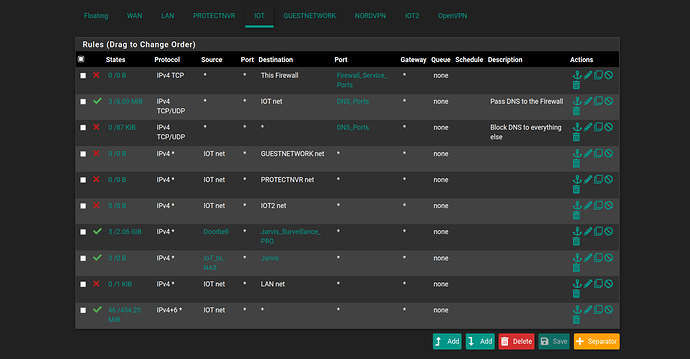 Rule 3:
You have a problem there, chromecast uses 8.8.8.8, you can’t force them to use your own DNS, its hardcoded.

Is it possible add a rewrite rule, to redirect the 8.8.8.8 queries to your own DNS server?

I have a JBL 9.1 soundbar chromecast capable. And a laptop on it.
The laptop can ping the soundbar IP, but nothing shows up in chrome cast menu.

I did try all open rule, and changed the source port for DNS

Do you get any responses for these?

For some reason the google doc wanted to see if i can ping those address, weird

Did you override the domain name in avahi?