pfSense + unifi switch VLAN not working (No IP, No internet)

I’ve been trying to using pfSense as my firewall for months, last week I finally decided to upgrade main PC, I’m trying to used left over PC as a pfSense box, purchased Dell H092P Quad NIC, and set it up pfSense. Everything work flawlessly so far, but VLANs, I’m trying to like everyone setup multiple VLANs for different purpose, eg one for surveillance system, one for IOT, and so on. I can’t get it to work, I watched Tom’s video on how to setup VLAN using pfSense and unifi switch, followed exact step. I think pfSense isn’t carry out VLAN information to switch? Also unifi controller is on unRAID docker, hopefully this isn’t the problem. I’m able to ping from 192.168.3.x to 192.168.69.1 but anything I plug in to port 23 doesn’t have internet and DHCP wont’ hand out IP

This is my set up, hopefully anyone with able to help me out solved this.
pfSense setting 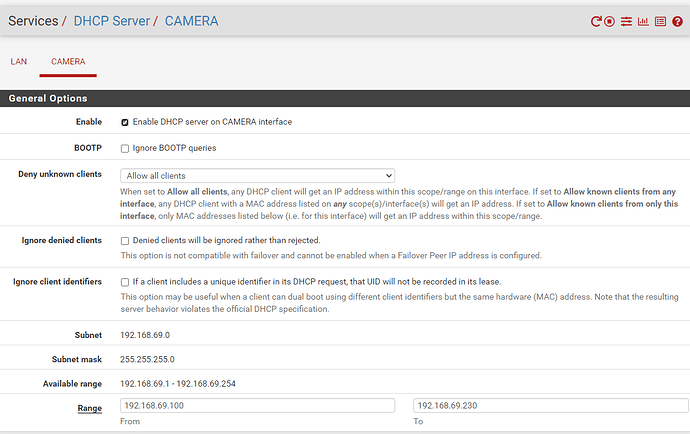 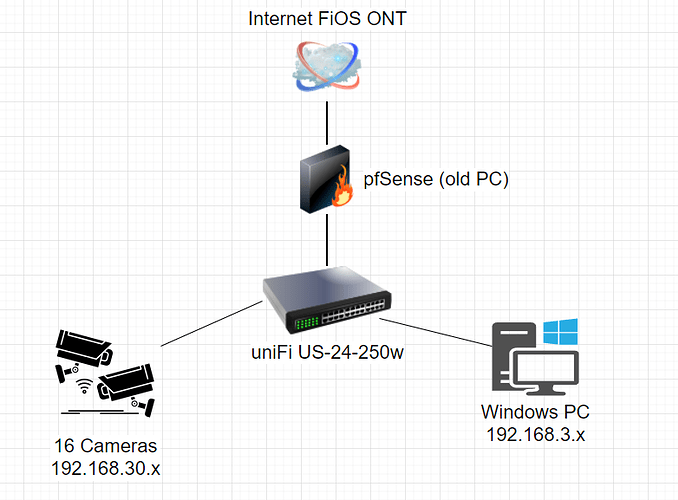 Any input helping me would be greatly appreciated

Make that going from the pfsense to the switch that port is set to ALL on the UniFi.

All 23 ports is on ALL beside the port that I want it to be on VLAN.

If you have a quad port NIC why don’t you just use port 3 for the camera network? Or if you will be adding more vlans use port 3 as the trunk into your switch and add vlan 69 to it?.

But in your current configuration it looks as if port 23 on your switch might not be setup as a trunk port (I do not know the unfi switch interface that well). Maybe someone with unifi knowledge can comment on this.

Following Tom’s video that’s all he did and he able to connect each VLAN and set up firewall rules. I’m do not know anywhere you can set trunk. I thought ‘ALL’ profile is trunk.

Like @dmatzen suggested, using port 3(igb2) as trunk and connect it to unifi switch port 22 set it as ‘ALL’ profile, and whatever port that was camera set to VLAN 69 able to hand out IP, and access internet. I dont know why if I put it on LAN doesnt work.