At one point, without changing anything (I think), A and B was able to ping each other, but B was not able to ping C or D or vise versa, even though they are on the same network as A and has no firewalls enabled. 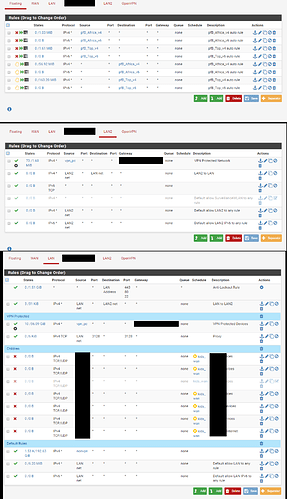 now after sitting without any changes on the pfsense box, A C and D computer can all ping the B computer and B and ping A C and D. However, when I try to access the camera on computer C (port 8080) it gets timed out and I can no longer ping from B to C, until I initialize a ping FROM C to B…

Are these assigned to VLANS or actual ports?

actual ports all wise and knowing one

I want them to talk for now, just like a regular switch and network but with two seperate IP ranges

they are able to talk for a while, then it times out. Not sure if it’s anything like a protection rule / feature or just the box I used that isn’t powerful enough and can’t handle the request.

Computer is an old Dell XPS420

added rules LAN2 to LAN under LAN and the reverse under LAN2.

And has that helped? Keep in mind what may be causing it to work and then suddenly not work is having existing entries in the state table that continue to allow traffic even after changing the rule responsible for allowing it. So I would recommend clearing your state table every time you make changes to your firewall rules just to be sure your seeing an accurate representation of their ability to communicate. Thats under Diagnostics->States->Reset States

Looking at your Firewall rules, there are a lot of issues with them. On your LAN you have an allow rule from (vpn_pc) to anything via a gateway. All your traffic appears to be matching that rule and never moving to the next rule of Blocks. You should really start from scratch and delete all rules under your LAN’s and create one rule that says, Allow ALL to ALL. Then anything you want blocked place ABOVE that rule. That is a good starting point.

unfortunately not. Pinging still works on and off, can’t access the computer C:8080 or 81

not using a switch. The computer has a quad NIC in it.
VPN rule is filtered with an alias for only certain computers, none of them apart of this.

It’s a complex issue to troubleshoot without physical access. I would recommend collecting more diagnostic information using traceroute to see how the packet is traveling, looking at firewall logs to see if the packet is being denied there or if its happening on the guest computer’s local firewall.