I tried so many different combination and I think @LTS_Tom, you might be able to point me to right direction. I watched you this video and tried to figure out but not working out if I also tag vlan as well.

So here is what I am trying to do:

pfsense with 5 LAN port each is with its unique subnet

in unifi I have made network with vlan tag like this: 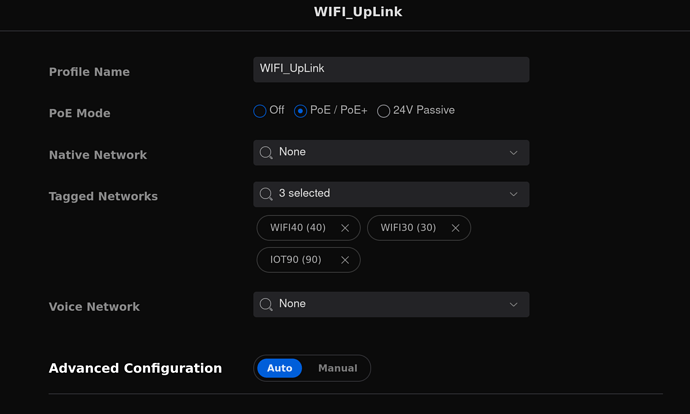 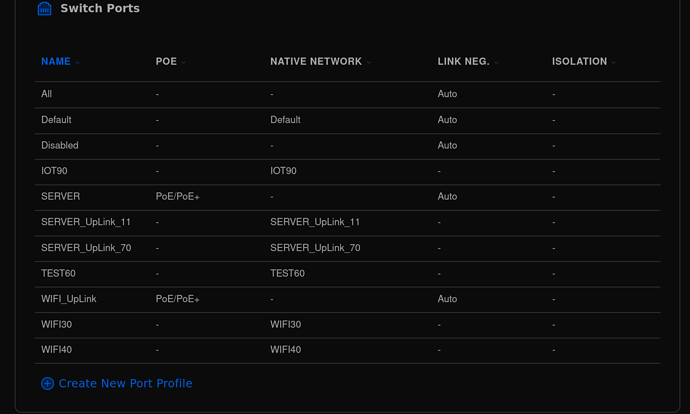 If I only use one profile, then it work but vlan coming from pfsense on same interface, doesn’t work.

Can you please point me to right direction? Thank you.

I took your advice but no luck. Here is current state. 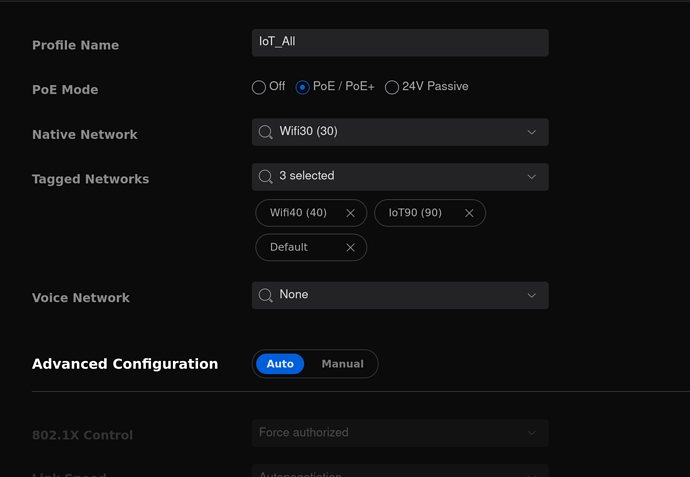 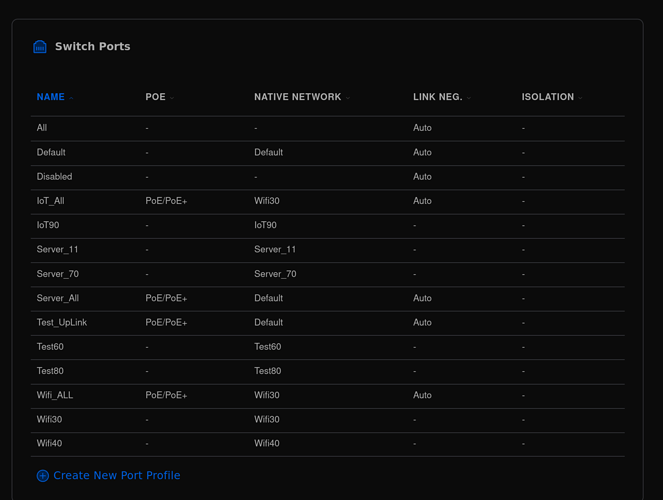 I made few changes and here is what is missing

The Wifi_All should have worked but have you tried setting Native to 10.0.30.1 (Green Tiger) and in your Tagged network setting all your networks including 10.0.30.1?. Also remove your Default.

What do you mean by

Also, are you using the Netgate 4100 or 6100? Or is this a custom build with pfSense installed on top? Not that it matters, I just want to have a clear picture of your HW setup for the firewall.

I am using protectli device with 6 NIC ports.
wifi 30 is native 10.0.30.1 but in unifi I have to do as vlan id. I watched Tom’s latest video on vlan and unifi. Here is link to video: How To Setup VLANs With pfsense & UniFI 2022 - YouTube 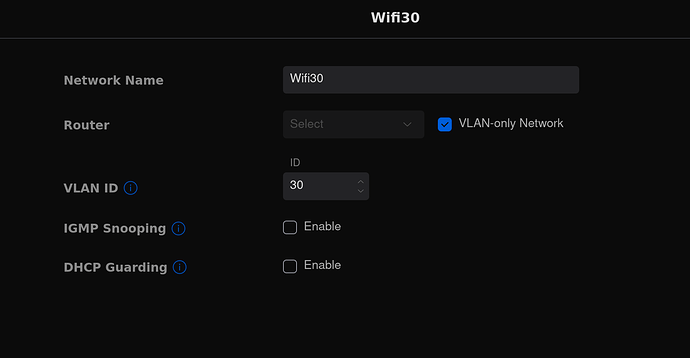 This is current setting (Works everything but defeat purpose of separating vlans as it gives ip of default network to AP: 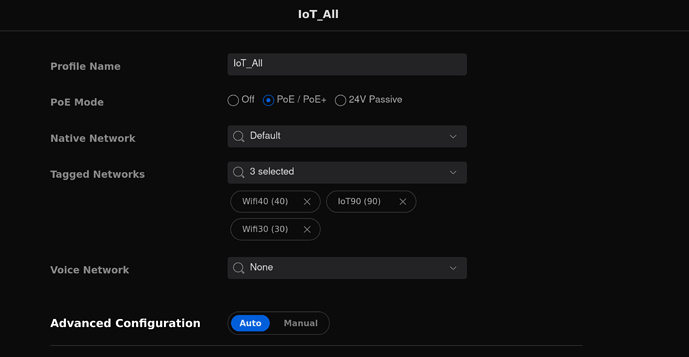 If I set Native to wifi30, and rest of wifi40 and iot90 as tagged, it doesn’t work.
This is setting which doesn’t work. 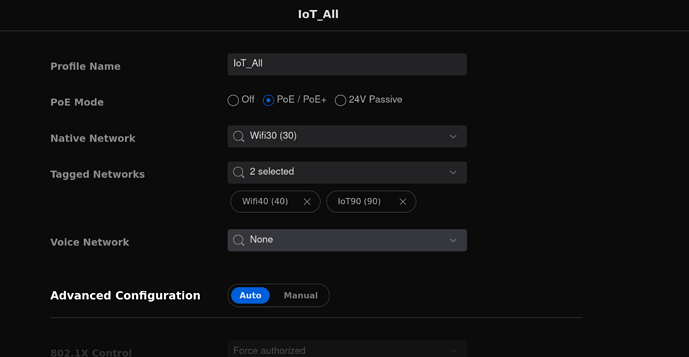 This setting doesn’t work either: 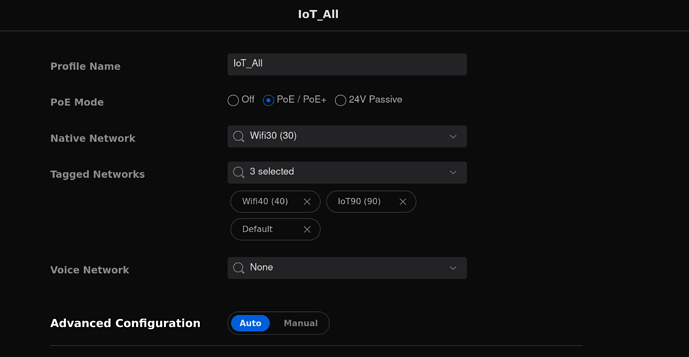 If I select, wifi30 as uplink for port 3, it doesn’t work either: 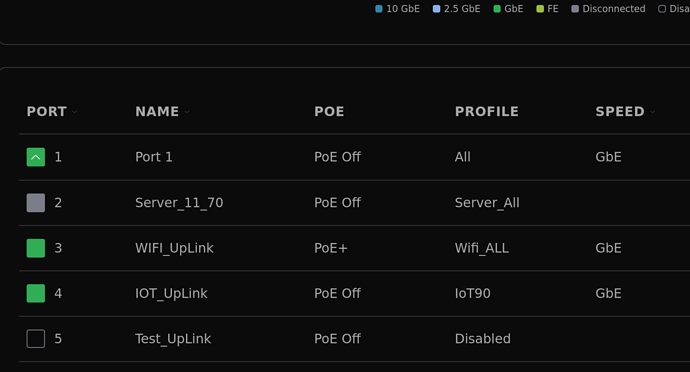 Only work if I create profile with wifi30 and wifi40 as wifi_all and set that port 3.

Yes but the only VLAN’s you have on pfSense is:

You don’t have a “VLAN 30” in pfSense because your WiFi30 is effectively your igb3 interface or 10.0.30.1 network which is not a VLAN. Your native network is igb3 and you’ve created a VLAN 40 on that interface. On that interface the only VLAN is 40. This is why it works when you create a switch profile with WiFi 30 as the native and add your VLAN 40 as tagged network to it. You need to create a VLAN 90 on your igb3 interface and add it to the WiFi_ALL profile. Use your igb4 interface for some other network. I believe it is possible to use the igb4 but then we’re talking about getting into the DOT1Q stuff, PVID, and tagging. But the easier route is just make a VLAN 90 on your igb3 interface.

You have six physical interfaces. Of which you could create 24,564 VLAN’s but remove your igb0 WAN and it’s 20,470 VLANs. Because you don’t create VLAN’s on your WAN. And unless you have 802.1q mode enabled on pfSense then it’s only 640 VLANs you could use. But no one ever uses that many VLANs. 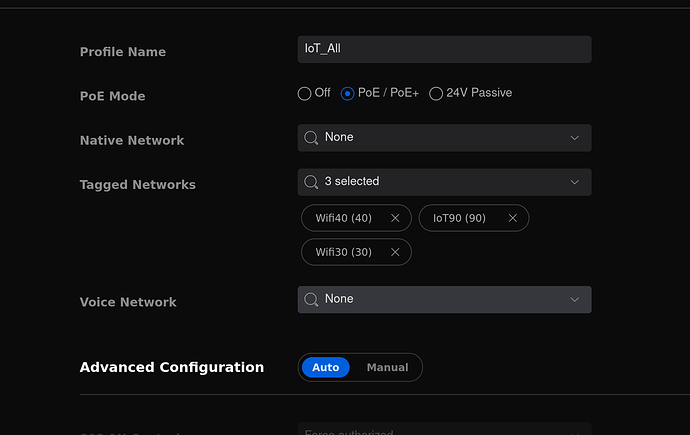 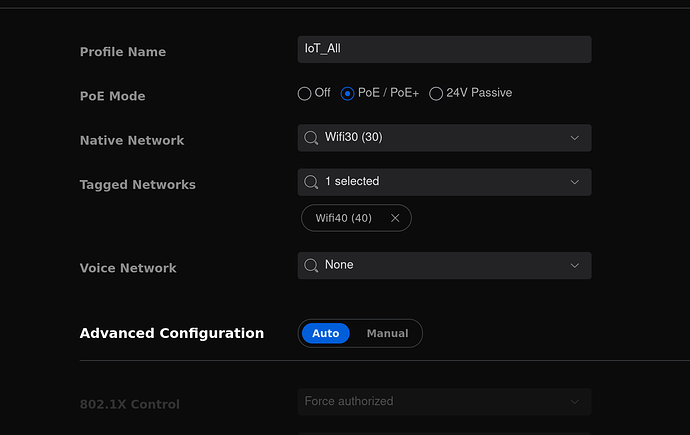 if I keep native profile as default, only then all works but again, I don’t get isolated subnet ip for my access point. I get ip of default.

may be @LTS_Tom give some insight as if possible at all and I am not missing something small but important.

It didn’t work because you didn’t do what I recommended and left out the native network. However, I was partly wrong. So I did some research and testing on my network. I’m not sure what you’re testing for your wifi networks. Because I don’t have an exact setup as you do but I can still simulate one. I only have one native network and multiple VLANs with 1Gb connections. But as I’ve read, from the UI community, a native network corresponds to a default “All” profile that’s for uplink to other UniFi equipment.

If you remember from Tom’s video, he mentions the All profile. So I was partially saying the wrong information. The native network needs to be Default. However, since you have six physical interfaces. I’m not sure exactly how UniFi sees a native network in your setup. Theoretically, you could plug say the ig5 interface into your switch which should effectively become your native network.

This means the IoT_All picture you posted in a previous post is correct. But I’m not sure why you think it defeats the purpose of separating VLANs. You separate out those networks in your Wifi Networks under settings in the Unif Controller. You can create new WiFi networks and set the network it should use. For example, I have multiple Wifi Networks, and they all use multiple separate VLANs. My pfSense controls which of those WiFi VLANs can talk to each other.

So the picture you posted in this post is correct: Pfsense and unifi - multiple uplink with vlan - #5 by formatall 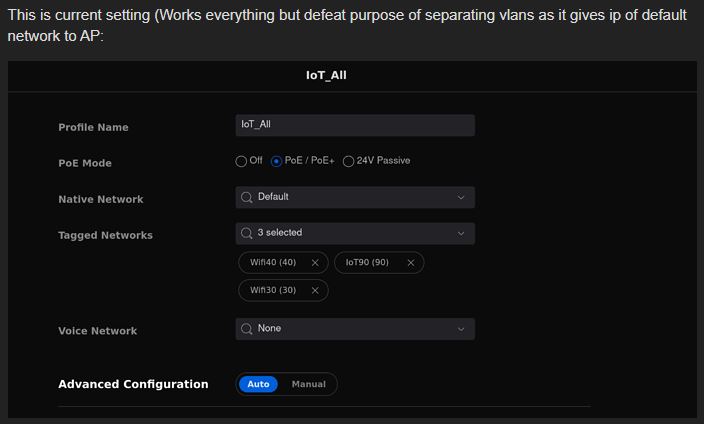 But again, I’m not sure why you think it defeats the purpose of separating VLANs.

@formatall you sound like you’re having a tough time !

I don’t have the same kit as you, however, I do have a pfSense box with 6 ethernet ports. What I do is to keep one port on the LAN, I can directly access pfSense via this port, the remaining ports I put in LAGG and carry my vlans. I don’t really use my LAN as such.

You might want to do the same kinda thing.

The only caveat is if you have a lot of cross vlan traffic then having separate ports on the pfsense box might be a bit more efficient.