Morning guys first time here. I need help opening a local port of 10101 between two pc’s connected to the pfsense box. I watched Tom’s video on setting up Nat for each port but having no luck. I don’t need the port open to the web just locally. Any help would be greatly appreciated. If needed I can screen shot what I did for settings. I have 1 port called 1950x and the other is called plexsever. Not sure what you all need for information. IP of 192.168.3.1 is the Plex and 192.168.2.10 is the 1950x could only upload one picture but think this shows my settings that don’t work. Thanks in advance

PS I did connect the pc’s together using a old netgear router and it worked just fine. So I know that I have there individual firewalls setup correctly. Just still a noob with pfsense. 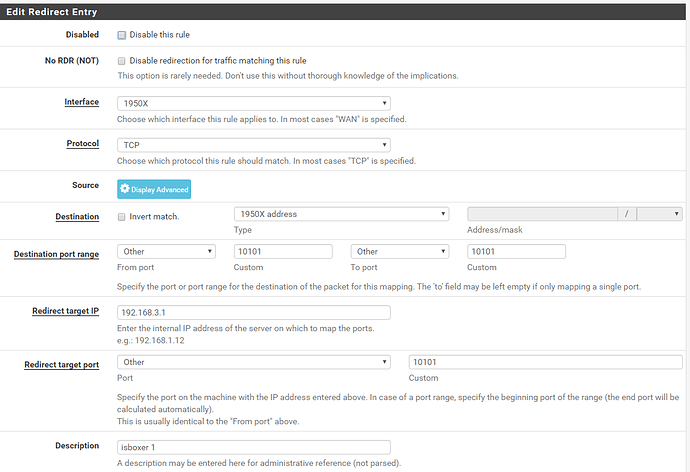 OK so I miss understand what my needs are. I did do a reset to to make it default as possible other than installing pfblockerng. So my pfsense box has its on board Ethernet used as the Wan and I added a 4 port Ethernet card. So LAN “port 1” is my main pc and OPT1 “port2” is my second pc. The program I use is Isboxer/Innerspace can’t talk to each other. They use port 10101 and 10102. Connected directly to my pfsense box they don’t talk but if I connect them to my Netgear router which is connect to OPT3 they work going through that. OPT3 has the same firewall rules as OPT2.

I should add that I do use a program called Synergy that I use to share my mouse and keyboard from my main pc to my second pc and that works with no problems.

Your configuration should allow unfettered network access between LAN and OPT1.

I’m not familiar with that software package. However, I do know that there are some games&tools (particularly ones that autodiscover) that only talk on the same subnet using broadcast messages. My guess is that your netgear has an internal switch (so the 2 connected clients are on the same subnet). Why not use a basic switch and put both computers on LAN?
Otherwise, it might be possible to bridge the 2 interfaces and achieve something similar. I haven’t done it myself, but take a look at: https://docs.netgate.com/pfsense/en/latest/interfaces/interface-bridges.html

I think your onto something here. I did message the developer of the program on his Discord channel so when I hear back from him I’ll let you know what he says. I greatly appropriate your help and patients in helping me trying to figure this out.