Network advise for a hot warehouse

I am a new user of the forum. I’ve read everything to try to ensure I follow all the rules, so please be gentle if I’ve overlooked something. And thank you to Mr. Lawrence for making this incredible site for this type of collaboration.

I work for a warehousing company that is trying to keep computer costs as low as possible (aren’t we all, though?). That being said, we’ve taken IT into our own hands and have followed Mr. Lawrence’s suggestions over the past 3 years of major system upgrades with a Netgate 4100 at the head of the network, an Unifi USW-Pro-48-PoE running the entire office systems’ on each respective isolated VLANs, and a USW-24-PoE in an even more secured office focusing on the locked down “camera network” with a Synology and Reolink cameras running the security system. I feel like this is pretty familiar for those of us who have been those that have followed Lawrence Systems on Youtube for a few years now (okay, outside the Reolinks).

The company has two warehouses that are physically separated. Thankfully when the second warehouse was constructed decades ago, there were two tunnels made underground to connect the two structures, one made for power (high voltage) and one made for whatever would’ve been needed in the future (which would have been analog phones in the day, but anyways). There is an easement on the other side of the second warehouse that has no HVAC, and management would like to tie multiple cameras into the current surveillance system due to several break-ins in the area and other companies catching the thieves running up and down these easements in the area.

So, the question is how to tie in more cameras to the existing surveillance system most efficiently. The aforementioned underground tunnel is estimated by myself and management right at that magical 100-meter meter marker (to get from the server room to the rafters through the tunnel to the second warehouse), not to mention next to high voltage when running underground. So, ethernet feels out of the question. 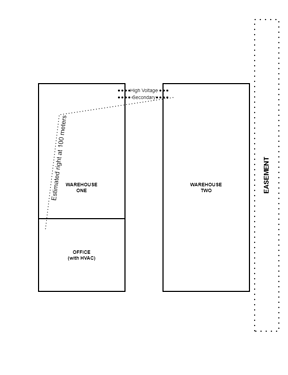 As proposed to management by myself, I think running fiber from the air-conditioned office across to a “sub-switch” to run any future expansion over in the second warehouse (cameras, PA horns, a VOIP phone on the dock, etc.). But is there a switch that can take a Texas warehouse’s HOT and dusty environment? And while we’ve taught ourselves how to head ethernet, is getting tools to run and head fiber feasible for one job?

As proposed by management. The second solution is a building-to-building bridge on the roofs. Much cheaper (a lot less payroll time running cable), but the concern is being in Texas, our natural disasters tend to be wind-related (tornados and hurricanes), and when you REALLY need the “new, warehouse 2” cameras to work after a disaster (looters), a wireless bridge is less reliable.

To recap, the two questions are:

What is the most efficient way to get a signal for multiple cameras back from the second warehouse to the office, being at 100 meters of distance in cabling next to high voltage?

What is the best way to power these cameras in a HOT warehouse, knowing PoE switches tend to run warm already?

We are open to other suggestions. I have searched the forums for a few weeks to find a similar issue to see if there is already a suggestion out there, but could not come across one. Thank you for any replies. I know this is extremely long-winded, but I wanted to get all the details out at the start.

I would have a 6 strand fiber run between the buildings and install a POE switch in the new warehouse, maybe a Cisco Catalyst IE3200. The IE-3200-8P2S-E (Cisco Catalyst IE3200 Rugged Series Data Sheet - Cisco) seems like the best option and will support running at 140 degrees in an enclosed box. If you have to use AC for power I would check out the IE5000s.

I don’t build networks professionally nor have I ever spliced a fiber line, so make of this what you will.

Depending on the amount of cameras, a wireless bridge might not have enough bandwidth. It’s also less reliable. Count yourself lucky that the builders had the foresight to connect the two buildings with conduit and take advantage of that! I’d go for fiber any day.

In my opinion, getting fiber splicing equipment for a single job is not worth it. Even more so because, like any craft, it requires experience to do it right. Either hire out the splicing or use ready-made fiber cables that are already terminated.

Regarding the switch: Look for “industrial POE switches”. There are some out there that handle temperatures up to 75°C.

@FredFerrell, thank you for your reply.

Thank you for the Cisco industrial recommendation. I did not even know those were a thing. I can see where Unifi had the USW-Industrial at one point, but it may have been discontinued. But that’s a moot point anyways because, without SFP, I’m back to RJ-45, without adapters nonetheless.

I look into these Cisco switch lines for recommendations!

@paolo, thank you for your reply.

Mr. Ferrell suggested the industrial switches, so I will start shopping for those over the next few days to get prices on those to see what management can tolerate.

And thank you for the fiber recommendation, do not know why ready-made fiber did not cross my mind. But, considering reliability first, ready-made will by far be the most economical choice rather than paying contractors the hours to come out and terminate.

The nice thing about having a professional installing the fiber is the responsibility and burden is on them to make sure it works. You could go buy a prefabricated cable to a specific length, but if it doesn’t work you are going to be out of luck. I would save myself the trouble and the risk. Also, I recommend you get a shielded cable.

I believe @LTS_Tom does cable installs so he could probably tell you stories about people trying to do things themselves before calling a pro.

@FredFerrell, that’s incredibly true. Ethernet is straightforward to troubleshoot and test with affordable, proper equipment; we’ve done it, made mistakes, tried it, fixed it, tested it again, and learned the hard way. Everything works and has for a couple of years. But with fiber, I agree with the crowd on this one. Steer towards professional installation and be done with it.

And I think we all believe we have the worst stories until we’ve talked to someone else. I’ve always wanted to buy someone like Tom a few beers to hear the horror stories and things they’ve learned the hard way over the years and ask questions. Then on the flip side of the coin, for a beginner/intermediate person with business technology in general, if you are interested enough, everything you learn leads to 5 more questions. So to even pick someone’s brain about this stuff, and them to give those brain-teaser questions every once in a while, would be fun and informative.

Thank you very much for your time and input.