Looks like the trusty Asus RT-AC3100 (FW: RMerlin 384.17) is just not able to keep up with the Symmetrical Gigabit fiber connection from our ISP, so we are in need of an upgraded solution.

I definitely want to shy away from another consumer AIO solution and would prefer something with some more oomph that will definitely last us a few years. Maybe with the potential for WAN aggregation of 2x internet connections (possibly both being symmetric gigabit connections if I can finagle the ISP into it)

Settled on the Untangled platform over pFSense/OPNSense

Additional Info that May/May Not be useful)

Just about everything I’ve found on the net is either many years old, talks about # of devices it can handle, or the users internet speeds on gig service are on average around 1000/50 and for those with companies that don’t gimp them have upto 1000/200, not symmetric 1000/1000 speeds. I sort of think that people are content with what they get, even if it’s only 600Mbps because it’s so much faster than what they had before.

Thanks for any suggestions given, and if you have any questions for me please let ask away

I’m more than happy to answer.

Although I mention Untangle being my preference, it doesn’t leave pFsense or OPNSense off the table. I just liked the feature set offered in Untangle v15 in comparison. And it seems a lot of people like the platform.

I plan on testing out all three on a less than ideal setup this weekend just to test ease of use, how to set it up, etc… (System -> Dell Optiplex 7060 USFF w/ 2x non-Intel USB3 to ETH adapters - will it work? Probably, but who knows)

From experience, the USB adapters will be a problem.

That custom build computer should be able to handle a lot. Wish I had more info for you, but my home internet is woefully slow. I will say that the Intel atom 2758 at work had no problems at gigabit speeds with pfsense, Suricata, an openvpn, e2guardian, and probably something I’m forgetting running on it.

I did see that USB NICs do have a tendency to have issues, which is why I won’t use this in a production capacity. But I should be able to at least test out each distro to get a feel for them and figure out which one will work best.

Now to find the hardware.

Fanless and low wattage would be nice, but not necessary.

Not to Hijack your thread but, i just moved from Untangle to another brand, I have my AMD quad core Nuc for sale that has untangle 15.x latest on it. I’m asking 150$ for it plus some shipping. It has a 128gig ssd 2 gig ethernet ports 2 pare wireless cards Power adapter and 8 gigs ram installed. 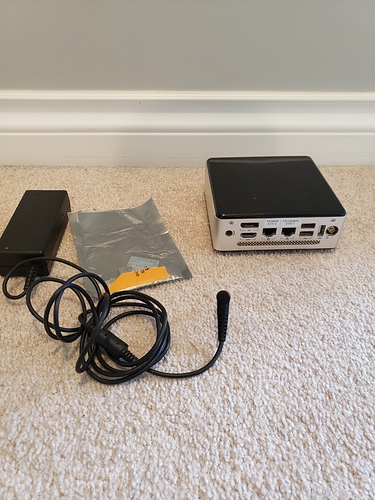 Just saw your post. I will have to get back to you on that.