I am building a network and want to have a home lab. Any suggestion for a low cost PC for proxmox?

Depends on your use case.

I installed Proxmox on a used Intel QNAP 2-bay NAS I bought off evilBay. Came with enough RAM and disks to suit my needs. Certainly not enough horsepower to run multiple VMs simultaneously, but enough for a Windows 10 VM and occasional *nix VM.

I’m running Proxmox on a Lenovo m900 i7 6 gen desktop with 64GB ram. Works great for me and cheap box to buy, ram is pricey. Added a quad port NIC too.

I might go with that option but what do you mean quad port NIC?

It used to be that one could pickup an Intel i340-T4 quad port PCIe adapter for under $30 (USD) including shipping. Lots of places pulled their 1 GigE NICs in favor of 10 GigE years ago and are pulling 10 GigE NICs in favor of 25, 40 and 100 GigE adapters. I like having spares so if I needed 2 I ordered 3. what you need to watch out for is knock-off non-Intel parts. for the prices that I see on ebay.com currently for i340-T4 and I350-T4 quad port PCIe NICs, I’d rather go for 10 GigE adapters but then you’d need to run point to point or have a 10 GigE switch. 10 GigE RJ45 adapters tend to generate a large amount of heat. SFP+ adapters with DACs are more power friendly. But here you are in scope creep. sorry about that. the nice thing about a quad port PCIe NIC is that you can allocate a pair of physical ports to the pfSense VM via IOMMU (SRV-IO means not having to allocate the entire PCIe device to the guest VM) and still have a pair of ports left over for other VMs.

I have 3 x HP Elitedesk G1 i7 PC’s with 32gb of RAM in each in a Proxmox cluster. They all have a small SSD and a 6Tb SATA NAS drive in each. I also installed a dual gbit NIC into each (1 onboard, plus 2 more) that supports LACP. Behind the 3 HP Elitedesk’s is a HPE Gen8 Microserver with a couple of 4Tb SATA drives and a larger archive drive. The Microserver runs Proxmox Backup.

Everything connects to a Cisco 2960-S Catalyst switch that can have up to 6 Port Channels. It’s simple and easy.

As none of the machines run Registered ECC Ram, they all get a weekly restart between 3 and 4 on Saturday morning. This flushes the memory and keeps the VMs and CT’s running sweet.

Next addition I would like to include a later gen CPU that supports GPU processing for my Plex server.

I run vlans on my network, so I use the onboard ethernet port for the management vlan which is also where I’ve installed Proxmox, then added a second ethernet card with four ports which are in a LAGG from which I access the other vlans.

The thing to keep in mind, is that RAM is the main constraint, the Intel 6th gen will only address 64GB if you need more you might need to look at a later generation processor which addresses 128GB.

This one looks small and nice but it’s only 4 cores. I assume it would work for a few VM’s. 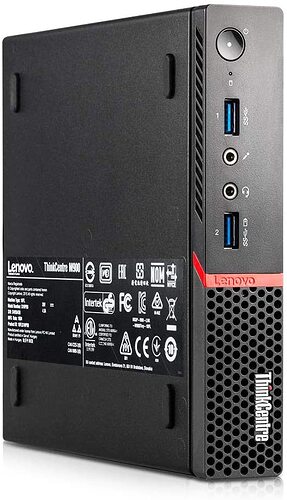 Incredible Lenovo Quality and unmatched reliability - all in a tiny size! Utilizing an Intel Quad Core 6th generation i7 processor and a moderately sized hard drive, you will be able to move quickly through the most demanding computational tasks. The...

I ended up with a box like this https://www.lenovo.com/gb/en/desktops-and-all-in-ones/thinkcentre/m-series-sff/ThinkCentre-M900-SFF/p/11TC1MDM900 it has some pci slots and four dimm slots.

I have a dell r410 that has proxmox on it. It is a rackmount server that I paid about 200 dollars for. It seems to work well for what I have going on.