Looking for Opinions - switching to Unifi and Adding some redundancy

So I’ve decided I think I want to take a stab at UNIFI switching. I already use their AP’s and love them, and my cisco gear is getting log in the tooth, plus they are power hogs. In the process of redesigning my home network , cough, lab, cough (see wife’s eyes rolling) , I also wanted to build in some more redundancy. Primarily because I’m nervous about the single power supplies in the unifi switches, and also because I’d like to protect around bricking a switch on an upgrade (which compared to cisco) is more frequent. If my design is ok, and my math is right, this is also cheaper than having the 2 of the redundant power modules (the network switches and the server switches are in separate racks). 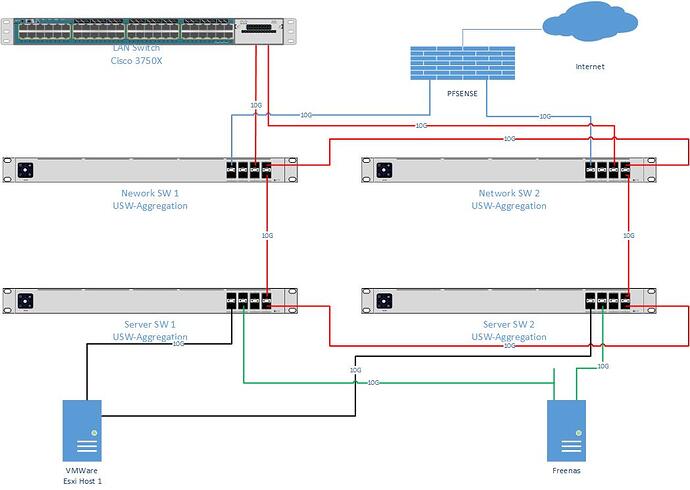 I think this is the direction I’m heading. I wanted to bounce it off people that have more experience with unifi than me

Is there anything that I’m going to get into serious trouble with ?

and lastly, What IF I wanted to LAGG any of the connections to the servers. could I LAGG group them and still have separate failover switches… Understanding that Unifi doesn’t support MLAGG but could I do 2 10gig lagg on one switch and a failover to another 2 10Gig lag on the other switch ? Not that I need 20gig but since I’m on a learning path I’m curious as to what I COULD do

I welcome comments and opinions…

Seems fine in general. I would set the two ports on PFSense in a bridge with RSTP, with PFSense as the root (manually set its cost low).

Ok glad I’m not out in left field.

I assume your suggesting the pfsense box being the root because it’s the common point to most of the traffic ? or is it just a personal preference ?

Well, if you don’t have the PFSense being root, meaning something else is root, you are going to have one of those two PFSense ports disabled by RSTP in a steady-state. So why not have PFSense be the root and then both those connections are up normally?

There is solid logic in what you’re saying, hadn’t thought of that.

On the other hand, that would place PFSense as the single allowed connection between what ends up being two halves of switches. So it could be a bottleneck for same-subnet high speed traffic. So it depends on what you are most worried about performance-wise - traffic to/from the router, or traffic in the same subnet.

Well I pulled the trigger… some new toys will be coming in the next bit… Then the fun begins. I know what I’ll be doing for part of my summer holidays lol

Thanks for the help!