Looking for advice on extending or repeating wifi without wired connection

I have a network that has a Wireless Router from the ISP with solid bandwidth and wifi 2.4 and 5.

I want to extend or provision more wireless coverage via wifi connection to the wifi router. I can think of a few different ways to do this, and wanted input on what hardware to get that someone has used in real world scenarios. There are not numerous client connections, nor necessarily high bandwidth requirements - but dependability is a priority. Extending/repeating wifi is not normally my first choice, but in this case I think it may work best given all the parameters. I just need to identify (hopefully with your input) which hardware this community has found works well?

Obviously, wired backhaul is the best option. Avoid WiFi repeaters/extenders/boosters. MESH systems will cut bandwidth in half unless they have a dedicated backhaul channel, not to mention are extremely overpriced.

Since my ISPs HW does not support AX or WPA3, I disable my ISPs WiFi and install my own APs. I have a pair of Engenius EWS377APv3 configured with the same SSID on both bands and APs. Clients seamlessly switch between bands and APs without disruption with the built in band steering. Although the APs support MESH, I use a wired backhaul. In your case, you could try using MESH or if your home was built post '80 with decent quality wiring, you can add a pair of Ethernet over Power adapters to essentially add a wired backhaul.

NOTE: Older WiFi clients with outdated firmware may not connect to AX APs, even with AX disabled on the 2.4GHz band. Luckily, I only had 1 device out of 40 that did not connect to AX, a 20 year old HP Envy printer which was well beyond it’s useful life.

I use Orbi at my house and have used Eero in the office environment. Both worked fine for me. Also here is an article that I came across that you might find helpful. 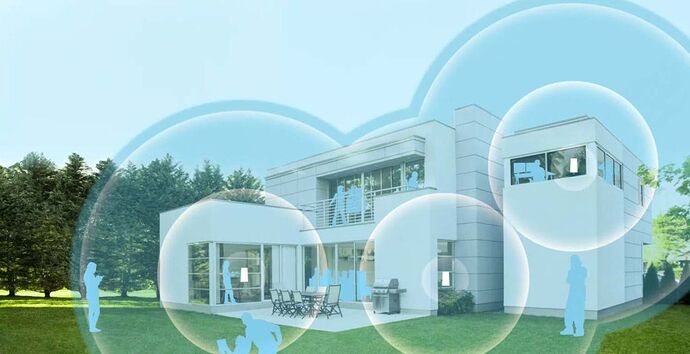 $1500 for an Orbi three pack? Glad someone has that kind of coin to blow.

Previously I had several routers, repeaters, extenders in my house. The wifi experience was still pretty crappy.

After fitting my house with ethernet, I placed a single wired AP in a location I previously could not (central and high) as I didn’t have a power point there. Now the wifi signal is strong and expansive with just the single device.

Depending on your house, your wifi experience may never be good until you can better place an AP.

Curious - would this be a viable solution:

I get two Unifi UAP-AC-HD or similar mesh enabled WAP and do a wired backhaul to the router with one unit and create an addional wifi SSID for the network for the 2 unit mesh. Then place the second UAP-AC-HD close enough to the wired AP so that I can create good overlap coverage?

Why wouldn’t you just use the original wireless network you create to extend with the other AP? I guess I don’t see the benefit.

FredFerrell the original wifi network is running on the ISP supplied modem/router/wifi and it does not support mesh with other devices running on that SSID unless I use the extender model. It seems to me the extender model would be effective, at least logistically, however my experience so far with extenders is that they are quirky and often inconsistent - perhaps the newer releases are better?

I am leaning towards 2, but would prefer if I could simply extend the existing wifi network and ssid as in 1. Perhaps someone will chime in with a recommendation that enables extension/repeating effectively in real world deployments - all of the vendors seem to claim it works seamlessly, but I am skeptical…

Extenders are usually a last resort, but I see what you mean. I have only dealt with end to end solutions so hopefully someone else has a good experience with something. Just make sure whatever you get they have a good return policy.

In some rare cases when options are limited I have used a Wifi Powerline adapter with some success. It provides a “hard wired” option for stretching wifi signals.
such as this: https://smile.amazon.com/gp/product/B00HSQAIQU/ref=ppx_yo_dt_b_search_asin_image?ie=UTF8&th=1

Last year I put up a pair of Mikrotik Cube 60G ac wireless cubes that use routerOS between my house and my shop. So you might take a look at the offerings they have. I connected the house one to one of the cable modems wired port (there are 2 or 3 ports on the back to do so) and mounted it on the side of the house in sight of the one mounted on the shop. The shop one I connected to a Mikrotik hAP ac2 wireless router. With a little care in alignment they are an pretty easy setup.
So far the setup has been bullet proof and fast with the only thing done to the setup is keep the firmware up to date.
I stream wireless , as well as use a laptop connected wireless in the shop while we exercise or work in there.