Hi, I have a Supermicro server with 4x 5TB drives. I configured RAID 5 on the Server and then install xcp-ng 7.6 on it. I log in to check the storage in the local storage configurations interface, under current storage repositories, i noticed the size of the disk like this “size 4616GB, 4616GB free” instead of the size of RAID 5 disk. i.e 12.9TB.

How can i resolve this issue? 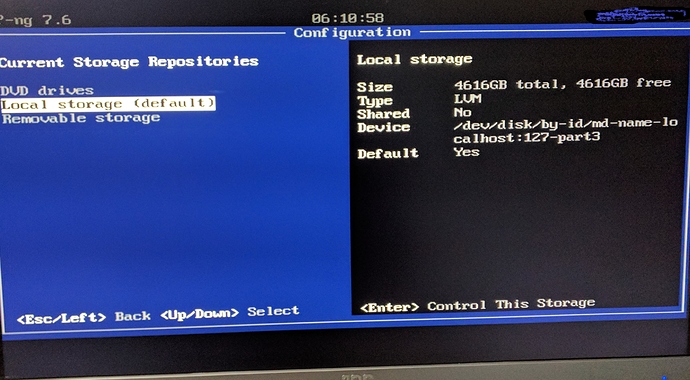 My best guess would be that the system is passing the drives through individually instead of as a single raided device.

Yeah! I guess that too. So is there a way around it, cos i change the BIOS setting from Legacy to UEFI but still it didn’t work.

Thanks for reading and replying to my post. Iv been struggling with this issue for weeks now.

I agree with Tom. This is why I despise hardware based raid controllers. When fails happen, you better hope to the sky that you can find similar hardware.

Myself, I prefer software based raid like zpools/ZFS or mdadm on Linux.

I’ve seen that happen when the OS needs a driver for the RAID controller. Just because it’s hardware RAID doesn’t mean it will appear like it should without the proper driver.

With that said, RAID 5 on spinners that large is a real bad idea. The chance of a second drive failing while the rebuild is going on is really high. Don’t believe me on that, put those drives in a a RAID rebuild calculator. It wouldn’t surprise me if there was a 1 in 40 chance of data loss every year.

Most Hardware RAID is really Software RAID in a card.
Independent cards usually have their own firmware and will work regardless of the OS, as they present the raid volume as a single drive.

Many new raid cards or raid functionality on motherboards, depend on the host OS (Windows usually) and a driver to work.

If you install a Unix/Linux based OS, it will see the individual drives instead of the raid volume.

The easiest solution in my opinion is to disable the RAID function on the BIOS and manage a software RAID from the OS. I don’t know if xcp-ng supports this.

Hello Guys, Thanks for the update. I was sick for some time that is why iv did not respond on time.
@Panfilo I tested it with windows and it works fine. Only XCP-NG 7.5 supports software RAID 1 during the installation. I will try mdadm to see if it will work.