How to make sure vlan 1 is not used

Hi, I always see vlan 1 as management vlan and 4091 as LAN vlan tags. But as a security measurement, 1 is not really allowed.
So how can I change this or what should I do to remove the threat? And how can I change vlan 4091 tag to another number?

I’m not really sure what your question is. You have already identified that you don’t want to use VLAN 1 due to security concerns. So… just don’t use it then. You are free to choose any VLAN you like. How you change it depends on the gear you’re using.

Well, I am a noob in this…
But the 1 IS in use by the management vlan? Whatever that may be.
If a switch is connected to the Netgate, it is connecting because of both have vlan 1 , no?
So a “hacker” can connect his switch to the network as well? Or has this got nothing to do with it? 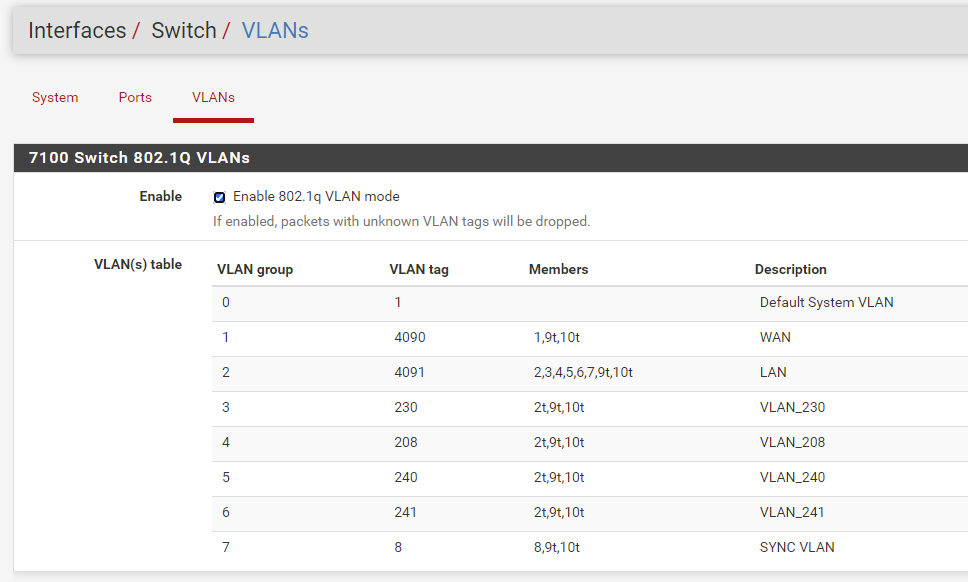 This is what it is now.

So I ignore the question about “removing/disabling” vlan tag 1 and 4091 then.

I am not completely clear on what you are asking, but I do have a 2022 video that covers VLAN & pfsense using UniFi, but it could be applied to what ever switch you are using.

Yes, I have seen it. But you use VLAN 1 in it, and for security reasons that is apparently not a good idea?

My setup is being used in a secure lab environment where all vlans will only be on there own vlan, except they have access to vlan 250 and vlan 230 (as these are devices like NAS or Server) , some vlans are even not allowed to the internet.

The security issue is that VLAN 1 can see the traffic of the other VLANs if you do not strip the other tags from the ports. Security comes down to how you configure things.

OK, so how should I go on with this then?