Hi,
So I followed Tom’s intro video on pfSense carefully and I’m stuck trying to get a 2nd wifi router as a second guest LAN.

These are the steps I took:

what am I missing?
does my OpenVPN need to be enabled for the guest interface somehow?

Plug a something into that interface and see if it get’s access that way you know if the issue is the router or pfsense settings.

I plugged the same PC that was working on the LAN port, into the guest one…

I can connect to the pfSense browser GUI, but not the outside internet. Maybe it’s the OpenVPN? Those rules are on the WAN though. And the LAN and Guest rules are just allow all, IPv4 and 6

Not sure what OpenVPN has to do with any of this. I asume you want provide internet access to visitors via the second Wi-Fi router?

If so I would do the following:

Yeah so I’m stuck at step 5, allowing internet access via firewall. Can you describe how to do this please.

I can access the pfSense via Guest LAN, just not outside internet 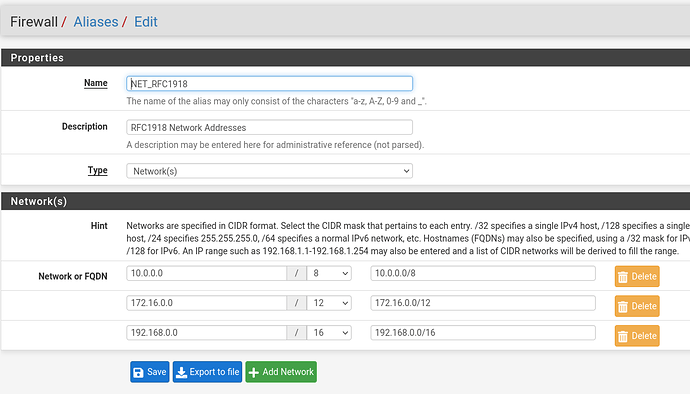 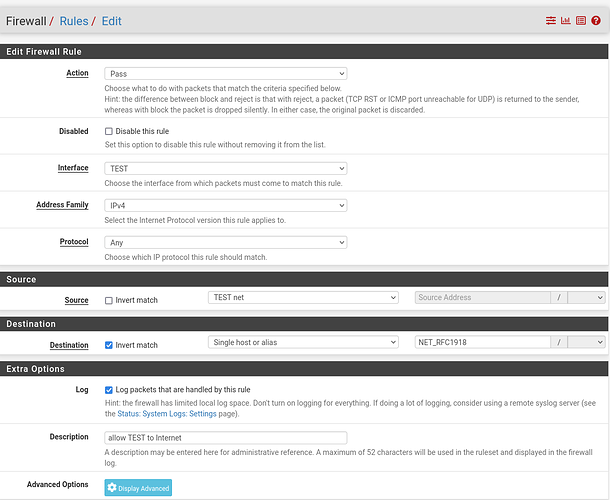 Note: Contrary to my screenshot, you probably don’t want to enable logging for this rule

It doesn’t work =(
I copied the IP addresses 192.168.2.1 for the Alias like your text instructions, and ignored the IPs in the image. or should I have done those random IPs?

Then you basically created a “GUEST net” to “Any” rule, because if you are using my example rule, but only added 192.168.2.1 to the alias, it won’t block anything. Internet should work but you also would be able to access all the other local networks.

or should I have done those random IPs?

These are not random IPs. These are the IP ranges that are reserved for private networks or Local Area Networks. Private network - Wikipedia

Basically my rule is saying. Allow traffic from “GUEST net” to all IPs except the private IP ranges which are defined in the RFC1918 alias. That way every device that is connected to the GUEST network can access any IP address in the internet but none in your local network, except for the ones that are in the GUEST subnet.

Of course, you could also add the actual subnets / IP ranges, which you are using on the other interfaces to the alias. Or you could create dedicated deny rules for each of them. But then you would have to adjust the alias or add another rule, everytime you’ are going to add a new interfaces / subnet in the future.

@TokyoTemple pfsense takes a while to get use to. @bb77 steps ought to work, however, you may well have a config error somewhere else.

What I have/would do in your position, is start from a clean install, from there your LAN has internet access, then set up the 2nd interface for guest using the same settings as LAN but changing it for the Guest subnet.

Additionally, I’d say it’s better to start off with a managed switch and plug everything into that. vLANS are the way to go, you could just start off with the LAN on pfSense, ISP vlan and Guest vlan.

It will take trial and error until it clicks, but the pfSense backup feature is pretty handy

Ah I see. I appreciate your explanation. Can you explain the “invert match” part in the rules? It’s confusing

I got VPN on LAN working fine, just want the same thing in the next port. doesn’t have to be “guest”

Can you explain the “invert match” part in the rules?

By checking the “Invert match” box you invert the match. This means the rule applies to any addresses except the ones listed.

This is confusing. This is a firewall LAN rule, so when you say traffic, what traffic?

The traffic from the Guest Wifi port? Why would it need to be blocked from itself? 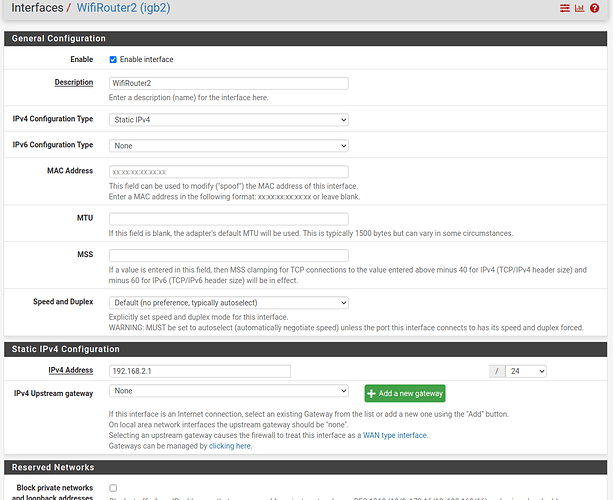 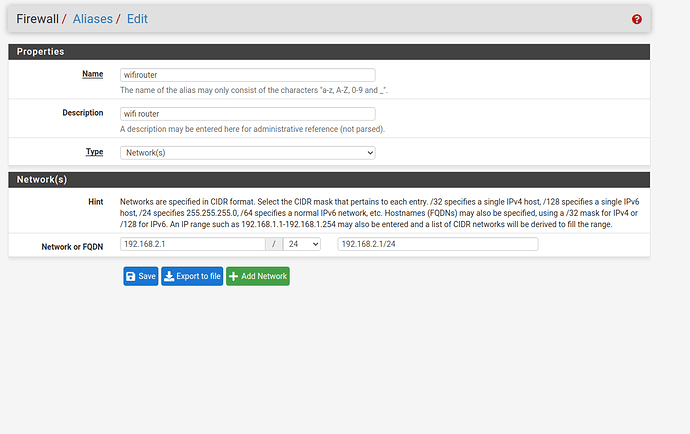 Well you posted screenshots of the setup you described earlier.

This is confusing. This is a firewall LAN rule, so when you say traffic, what traffic?

Why would it need to be blocked from itself?

It’s not blocked by itself, because the rule only affects traffic that is routed to other networks / subnets. Within the same subnet the rule has no effect.