Forums.lawrencesystems.com Email being sent to spam

Just noticed today one of the update emails got sent to my spam, just a head ups google/gmail is being weird. 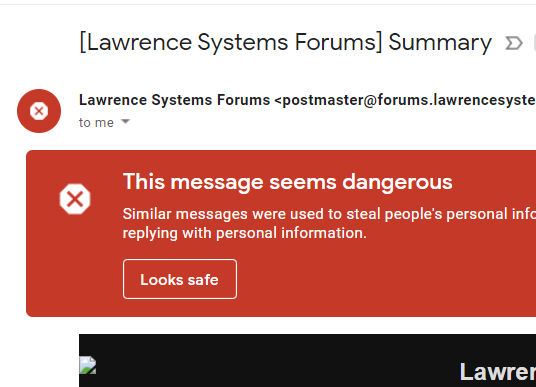 Weird, we use Google and it’s not going to spam for me or my staff. We don’t have any special filters.

Yea I’m not entirely sure of the “why”, just noticed one day I wasn’t getting the updates. Maybe I don’t open enough frequently and some “AI/script” has decided email with less than average activity = spam? Seeing I’m the only one who posted could be a per-user thing.

I would guess yours works since the accounts you guys are using are within the same domain - automatic trust (as opposed to personal accounts receiving *lawrencesystems.com). I’m assuming you and your staff used @lawrence.com emails to verify it’s not going to spam.

Perhaps there is some resource that’s not available on the web server? A logo, image or CSS file.

This happened to me while using Invoice Ninja before. I was using the dark theme emails and it was referring to a file that didn’t exist. I switched to the plain theme and the emails started delivering without an issue.

I just tried a reset email and I received it in my inbox although it looks like the emails aren’t sending with the dark theme anymore. Maybe Tom switched that.