I am new to the networking world for home use. My fiance and I just closed on our home and I am going to geek the space out with my own home network. I plan to use the following pieces of kit and wire them as shown. If this isn’t the correct forum area please let me know so I may go to the correct area. This will be my first build-out and I’m hesitant to just go ordering a bunch of parts without some validation that my set up will play well together. I am mainly concerned with the ability to create VLANS using two different brand managed switches.

My goals for this set up were simple. Provide each room with 2 RJ45 jacks, have the ability to create VLANS, secure the perimeter with 5 POE cameras, have network storage, WAPs, and the ability to add in some home automation down the road. I started watching a lot of Lawrence’s youtube videos and they have helped tremendously in creating this list, as well as creating a diagram of how the network will be connected. Below is the hardware I plan to use in the install.

I have included below a diagram that I drew up of the network. This is the first diagram I’ve drawn (go easy on me lol) and any feedback on better ways to make it all work would be greatly appreciated.

I am excited to get involved on this forum and soak in all of the knowledge I can! 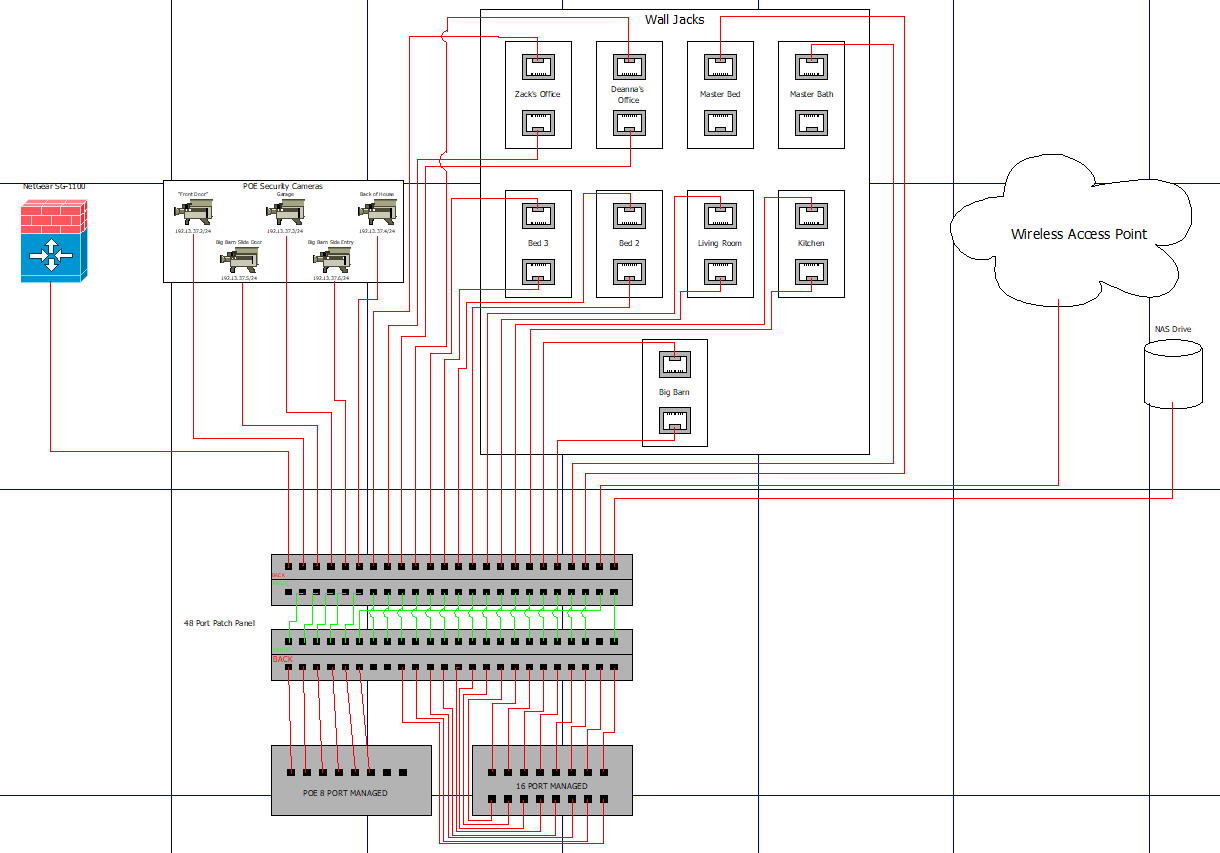 Like most things it’s trial and error, you’ll find out that you need things that you never even heard of! Some points that I encountered when setting up the nth iteration of my network that might also be relevant to you or you might want to consider:

Stick with PfSense, you will at least get updates. When I inspect my logs I see ip addresses have been blocked every second from all over the world. Good luck you will need it !

Oh yeah forgot to mention, set up a guest vlan, I don’t know your AP but if you can issue vouchers that’s a really neat feature. Then you don’t have to worry about passwords and people having access to your network . i use a TP-Link EAP245 and I really like its captive portal.

Thank you for all of these tips! A few questions if you don’t mind.

Guest VLAN is a must. Not sure if I will go with the voucher route, probably just going to do a password for now. We don’t plan on having many visitors lol.

I bought this box from Amazon I noticed sometimes it comes from Amazon and sometimes from China. It’s more expensive than a consumer router but cheaper than a Netgate. You can bond multiple ports for redundancy / increased bandwidth, ok for a home network it might be overkill but since it’s there I just set it up.

I have my 4 cams recording 24hr, when I connect remotely it’s fine as long as I have a good connection. I’ve never noticed PfSense sluggish, my OpenVPN servers are set up with 256 bit encryption, however, I’m unsure what the optimal settings should be.

When I’m transferring data over my site-to-site OpenVPN connection I can saturate my 50Mbit line, the router has no issues. Perhaps over faster connections it might be an issue but I would doubt it’s noticeable.

If you are worried about the OpenVPN performance, you can always buy a Raspberry Pi 4, set up OpenVPN and use that as a back up connection to home for cheap.

If you are coming from a consumer router, with PfSense you can easily set up WPA2 Enterprise, so basically users have their own password instead of sharing the same one.

If you have a PC with dual NICs you can just test out PfSense for no money. Trust me it will be trial and error but it’s best to avoid wasting money on kit you can’t re-purpose.

I’ve been using three of the 8-port TP-Link “Smart Switch” boxes that Tom mentioned in one or two of his videos. I’ve had zero problems with them. I use them in various parts of the house to split the “trunk” line into different VLANs.

My house didn’t have Cat-5 pre-wired unfortunately. And it would require too much pain to run it now. BUT the builder put RG-6 coax everywhere. I use these little Motorola boxes in three rooms that run 1G+ over coax. These things work great. I hook one of the TP-Link switches into each of these.

And I will agree with @neogrid to use pfSense. I started with a simple setup, but now I have four domains coming into it, with my main LAN and a separate DMZ network. I have HA set up between my main router and a backup so it fails over seamlessly. I just finished getting the HAProxy and ACME plugins set up and working (previously used Traefik in a docker container for that on a separate box). And with all that, pfSense just works!