I have been lurking here and watching Tom’s videos for quite a while now. Thanks Tom for the inspiration.
There are many examples of UniFi and PFsense networks with separate VLANS. I have a Juniper SRX Gateway and an HP Enterprise switch that I’m trying to setup with VLANS to segregate my network.
Should I have all of the VLAN networks running from the gateway or the HP switch? To be honest I have had one heck of a time configuring the SRX320 gateway. Making the gateway “flat” would be easier. The switch can be divided for each VLAN so I can add DHCP servers for each. I’m not sure where I’d place the Access Points (x2 Linksys AC5400), I thought they would be attached to the Management VLAN but…

Your advice is greatly appreciated.
-Chaz

The following is what I was originally thinking. 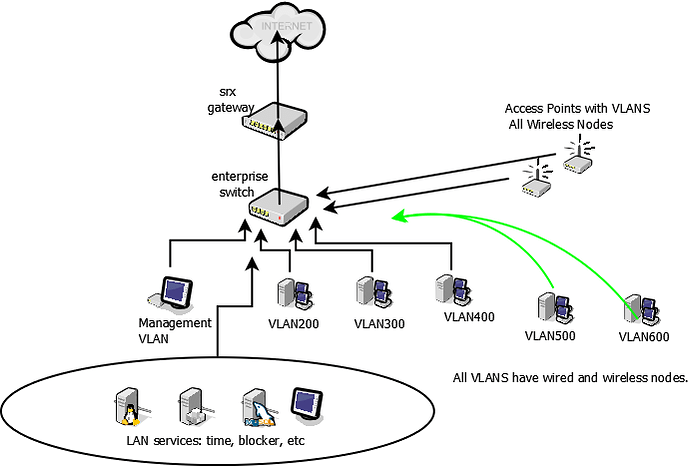 Which device on your network controls routing? VLANs usually need a router for inter-VLAN communication unless you have a Level3 switch. I thought DHCP service was exclusive to routers, but what do I know.

In general terms of segmenting your network – you’re going to have to evaluate “why” your particular network needs this. Flat networks are very easy to manage. VLANs aren’t really that difficult either although initially they usually put a strain on the budget since some additional hardware needs to be purchased and an initial strain on time

@kevdog So the HP Aruba Switch will do switching and routing along with VLANS and DHCP services for VLANS. The SRX320 Gateway Appliance (Firewall/Router/VPN, etc) will do it.

The real problem is that I’m still very much a NOOB with both devices but the SRX has been kicking my butt. The Juniper learning curve is steep and my time has been limited. Not that I can’t learn it, it just takes time.

The reason to segment is easy, Security. I have a network of cameras, IoT devices, hosted services for time, Ad-Blocking, NAS, TV’s, Plex, etc. I want to keep my private LAN devices separate and secure as possible.

I may just be overthinking this thing.

No I think your intentions are good and goals achievable, but unfortunately I don’t know anything about the hardware you are working with. sorry.

@chaz, I would route all your traffic through the Juniper since most switches don’t offer stateful firewall services. It’s much easier to manage, IMO. Also, I would probably upgrade to something newer than a SRX. Those things are probably as old as the PIX. Everything else looks good.

@FredFerrell Thanks, good point on upgrading the SRX but it has gigabit ports… sure wish it was capable of PFsense.

I’ll keep plugging away at learning Junos and the SRX320. We have a bunch of Fortigate FWs at work and they have an easier learning curve.

@chaz, I agree that Fortinets are much easier! So why spend time learning something that is irreverent? I would recommend investing time in a technology that will benefit you financially in the future. Fortigates are pretty cheap anyway so why not spend $100-$200 for your own learning? Maybe even buy something that is different than what you use at work, but is in use today. pfSense is also a good free option similar to Fortinet.