I just bought 1000ft roll of CAT6 cable from a reputable company. After receiving it I noticed on the box it says it is tested up to 350Mhz. Should I be worried about that? Most CAT6 cables I’ve seen say 500Mhz or 550MHz. Should I go ahead and install this cable or return it and buy different cable? I only have a 600M download and 20M upload internet connection but I’m hoping to get 1G internet in my area in the future.

Lastly, the part number of the cable is OE-CAT6RWH and it is 23AWG solid copper wire and conforms to
UL STD 444 and certified to CSA STD C22.2 NO.214 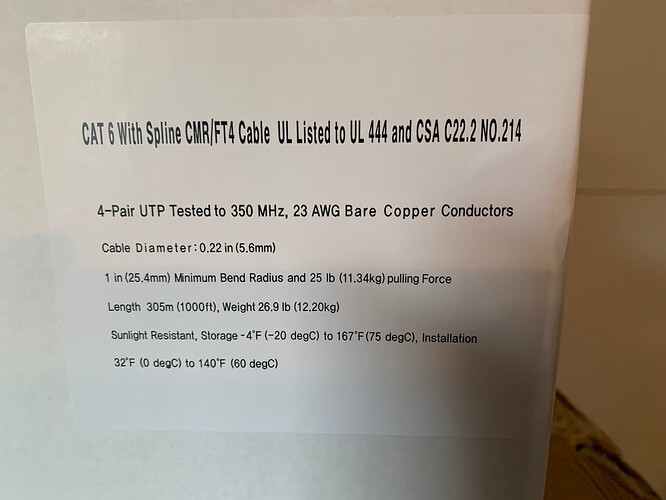 Thank you all for any guidance you can give. I think it is okay but don’t want to run the cable and then regret it.

This link says it needs to be able to sustain 250mhz but up to 500mhz is good.

What are the differences between CAT6, CAT6e, and CAT6A?

The TIA introduced two performance standards; Category 6 (CAT6) and Category 6A (CAT6A). However, there is no CAT6e standard. This blog helps explain.

That’s an incredibly generic box of cable, but it might not be horrible. I’d probably go for something better depending on what you really need. I’m guessing that if it passed 450mhz, they would have printed 450mhz on the box. But either way, still only rated for gigabit unless it is a short run.

Yeah my longest run will be less than 100ft. So maybe it will be just fine if GigE only needs 250Mhz. I just hate to go through the effort and expense of running the cable and not get the full BW.

Would love to hear if anyone else has used this cable too and had no problems.

Interesting I pulled up a data sheet for a 550MHz CAT6 cable and this cable actually has better insertion loss, return loss and NEXT ratings at 350Mhz than the 550MHz rated cable from True Cable. Makes me think the cable probably is just as good they just didn’t test it up to 550MHz. Makes you think

Maybe all the other companies are trying to impress by sweeping up to 500mhz or higher. Depending where you do the testing, sweeping higher may cost more money, maybe they stop at slightly over specification and save a little bit. Hard to say, but for gigabit you are probably fine.

To dig into this deeper you would need to find the frequency sweep graph and compare between different cables. You might find out that some companies use -xx db signal and others use -yy db signal as their cut off point. And they often do this for marketing. Yo can probably measure to several gigahertz, but that doesn’t imply that it will carry data at that low signal level.

My general rule is that if it is important, I buy Belden cable. If not so much then I’ll buy something I think is decent. So far decent hasn’t let me down, and Belden would be a rare let down if it happened.

If you are in the USA, lately I’ve been buying the decent cable from Cables and Kits, so far they have shipped good cable at less than Belden prices so no complaints. Even the stuff I’ve had to buy once in a while from the big box home stores hasn’t been terrible. Getting outdoor rated cable can sometimes be hard to find until you jump to direct burial which is overkill for the exterior of a house for a camera. Home Depot and Lowes both have an exterior cable that has worked well in the one application where I used it. Only Cat5e but plenty for a camera hanging off the side of a building.