NOTE THIS IS A FIXED PROBLEM, JUST A CURIOUSITY

So I’ve been using a (brand new) NanoHD, noticed the speed wasn’t great - a speed test (fast.com) a few feet from my old wifi router and new NanoHD (non-tested unit switched off), revealed that the NanoHD was around a quarter the speed of the wifi router. What alerted me to the problem was that buffering occurred on Plex with the Nano (via mobile phone/wifi connection), but never happened with the old wifi router (Draytek Vigor 2762). I fiddled around with it for an hour and then just as I was giving up, I switched off a Blink camera module that had been on and was always auto-connecting to it (the Nano).

Once I did that, the speed was equal or better than my original Wifi Router. I do wonder if this was just coincidence as I had made changes to the network, such as the managed network switch. Port g5 is being used (no other PoE devices), and I just set the priority to High level, but that’s pretty much it really. Also these changes meant a restart, then retest and at no point did the speed show signs of improvement.

Here’s a basic schematic of my “network” 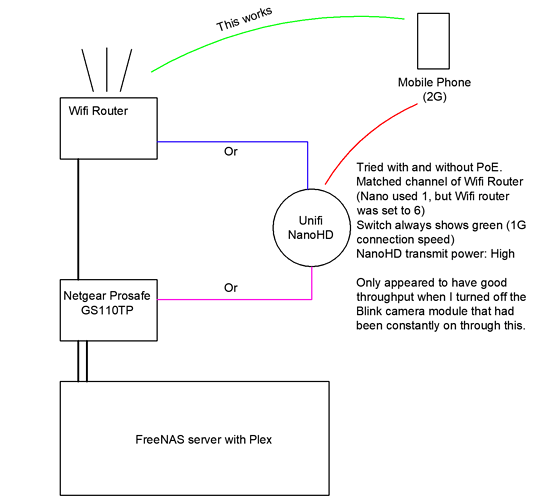 I’ve shown to cable lines to the Nano in pink and blue - I only rang one of these at any one time, just to clarify…of course the Nano only has one port!

Anyway, comments welcome. Did make me think that an average’ish person suffering these problems, may not have had the fortune to solve the problem, then they’d give Unifi a bad rep.

Just to confirm, you were experiencing this slowdown when using 2.4GHz? How far away was the blink camera? If it doesn’t have a good signal strength then it would be linking at a slower speed. Since the airwaves are a shared medium, only one device can communicate on a channel at once, and even if the client isn’t actively communicating the AP still has to reserve a bit of airtime to give it a chance to. And if it was being active (I don’t know anything about blink, but for example if it is constantly streaming to a server in the cloud or in your house) then the time it takes to complete its upload can be significant. For example its not uncommon to see link speeds around 40-60Mbps for 2.4GHz devices at decent distances or through tough obstacles. If a camera is streaming at 5Mbps and linked at 40Mbps, it would take at least 1/8 the airtime per second to transfer, more likely double that. So a poor connection plus active transfers could cut the available airtime, and thus bandwidth, for other devices in half.

I had a setup of IP cameras constantly streaming over wifi to a NAS, all on one SSID and LAN, bought bigger / better routers to improve general wifi reception, had an array of 10 routers/access points eventualy. No matter what I did wifi performance sucked.

Now I’m wired up with ethernet and a single AP, performance is great all round.

I’d say both placement of the AP is critical and cameras take up a lot of bandwidth especially if you max out the recording quality.

Thanks for commenting. Yes I was at 2.4GHz and initially the Nano was within the same room and about 4 feet away (though it wasn’t active, just connected - but like you say, it could still be using resources). The Blink has been on for 12 hours now and according to the Unifi S/W the traffic hasn’t reached 1Mb yet. It wasn’t streaming though, more of less in standby mode all the time. Thank you very much for that explanation though, I’m going to keep an eye on it - in the meantime I’ve now done what I intended and put the Nano in another room, seems to be working very well. I even went outside and according to the wifi info on my phone, I was capable of 72Mb, so very happy.

had a setup of IP cameras constantly streaming over wifi to a NAS, all on one SSID and LAN, bought bigger / better routers to improve general wifi reception, had an array of 10 routers/access points eventualy. No matter what I did wifi performance sucked.

Sorry to hear about your experience, I will definitely take note and avoid. At the moment I intend to have as many things wired as possible, leaving only hand held devices & laptops using wifi.

I’m just playing around at the moment really, in my office. Final destination will be home where I’ll buy another NanoHD to ensure full coverage. I do intend to keep away from Mesh and have each AP wired directly, quite fancy one of those outdoor ones too, but I’m still a bit undecided on that.

I’m now finally getting around to building my office at the back of the garden and it’ll be nice to have unifi coverage from the back of the house to the front (thin and long boundary). I’ve fudged wifi for years now, have used the wifi router that came free with the connection to cover the house, then a separate AP at the back of the garden on the end of a 40 metre (120ft) network cable. Irritating when I’m listening to the radio / youtube and it cuts out, then doesn’t connect with the closest wifi. It is a basic phone though (Samsung A10).

Hehe I was able to endure for over 17 years with crappy home setup !

For sure lay as much cable as you can, always double up, when you are looking for an AP:

Lol Well it’s taken the same amount of time for me! Has to be said, in the past, I was the only one connected…ahh, easier times

I definitely will take the opportunity and cable it up, planning to have 4 cables from office to house, partly in use and partly redundancy.

Those dual port ones seem to have a hiked up price, so I’ll probably just get single port ones - think I’ll pinky need 3 APs at most!

I’ll definitely like to play with VLANs as I want to be on a separate network to smaller people, just to protect my business stuff!