I am looking to rebuild my main Linux box, and rather than just throw Ubuntu back onto it I thought I would get the opinion of the masses?
So what do you all prefer? Is Ubuntu still the big boy on the block? Or is there a new hotness out there I should check out?
I appreciate your recommendations and time.

I think Ubuntu is still the big boy on the block although I know at least a few people in this forum have switched over to using POP os which is Ubuntu but with a lot more customization.

POP_OS! has been really smooth for me. But I never was much of a distrohopper, I focus on getting work done without disruption and while both Ubuntu and POP_OS! do tha, I feel that POP_OS! does it with more style.

Honestly it depends what you want to do with your system. I love Arch linux in a VM with ZFS filesystem with very basic desktop if needed. For quick setup – Ubuntu/Debian.

The distro doesn’t really matter all that much. It’s the DE (desktop environment) or WM (window manager) you choose which makes the most obvious difference. But the other big difference, which is less obvious, is the base system.

For base systems, you really want to choose your level of stability and frequency of updates. Do you want point-level releases which are rather traditional or a rolling release model?

In case you’re not aware, a rolling release model is a distro where you get updates daily, sometimes several times per day (Arch) and you’re always on the latest version of the system. There are no major annual, forklift, upgrades with this model like with other distro’s, Windows or macOS.

If you want ultra stability and point-level releases, choose Debian or one of its child distro’s. If you want cutting or even bleeding edge updates and a rolling release model, choose Arch or Gentoo.

The other thing to consider is the software repo’s and if they have what you want in them. This is probably the biggest foundational difference in distro’s - the package managers. Debian-based distro’s have a large number of available packages and so does Arch and it’s AUR (Arch User Repository). Regardless, if a package you want isn’t in a repo, you can always add it yourself manually.

The thing most people see as the obvious difference is the DE or WM. Do you want KDE, XFCE, Gnome and the like for DE’s? Or do you want a WM like DWM, AWESOME, i3 and others? This is the area where you will see the most, or least, polish, shine and options to play with and achieve the look & feel you desire.

You can pair any distro with any DE or WM and have it work. So you’ll want to choose your level of comfort in a base system, stable, point-release Debian-like or cutting-edge, rolling release Arch-like. Make sure the base system has the packages you want in their repo’s for easy installation or you’ll have to manually add them yourself. Then decide on which DE or WM you want to use on top of it.

For part of 2018 and the first half of 2019 I distro-hopped between Ubuntu, KDE Neon, Pop!_OS, MX, Manjaro, Mint and Arch. I also used a few different DE’s and WM’s on some of those distro’s too.

Then around August of 2019 I decided on Arch with the i3wm and that’s where I’m staying. At the office I use the Arch-based distro Manjaro with i3wm which is a more stable and vetted update model where the risk of breaking stuff is lessend.

I really like the rolling release model a lot and l really love window managers over traditional desktop environments. But that’s me and we have and use what we like and Linux systems allow us to choose from a huge variety of options.

@tkanger Desktop Linux Mint with Mate UI , server Ubuntu or Debian have also Centos. Why the Mate, less resource intensive works well on business class laptops. POP OS is nice but I dislike the UI but it can be switched. Like menues as opposed to screens full of icons.

I started on Mandrake Linux now called Mandriva (I think) used Fedora for a while but lately they have been getting more sluggish not sure if that is due to my computer or the resource management. I have been defaulting to Ubuntu 90% of the time when using Linux but the last 3-4 years Windows 10 has been my primary OS and just use Linux as a learning/ geek out tool.

Linux Mint is nice as well similar commands to Ubuntu as its based on Ubuntu but in my opinion very similar in functionality maybe a slight bit more my speed. Need to try POP though now that I have my XCP instance up I am likely to do that.

I’ve been upgrading hardware lately so I like to stick to something with a fairly new kernel. As long as my kernel has the hardware support I need I don’t really care much about the distribution it’s on. I care a lot more about the DE. I’ve jumped between several implementations of KDE but I usually come back to kubuntu.

I feel like knowing my intentions might be valuable here. I am planning on “upgrading” from an older Ubuntu box (virtual) that is mostly designed to manage some home automation, and to allow me to play in Linux without much risk, or hardware dedication. I have recently come into some extra hardware that is pretty good, so I am looking to test things like 10Gbe ports, and OpenVPN access.
Thanks for all the advise so far!

I’ve been using Solus as my daily driver for quite some time and have come to prefer it for general desktop/laptop use over the legacy distros. While the package selection is more limited in the native Solus repos than, say, Ubuntu, it is compatible with snaps and Flatpak, so you shouldn’t have much trouble installing whatever you want.

Solus actually released their most recent ISOs today, if you’d like more information: 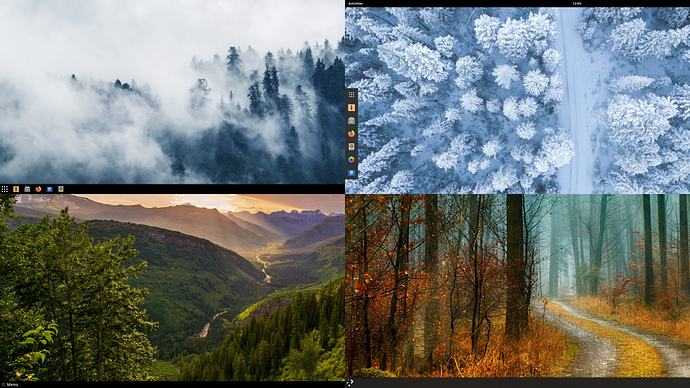 We are proud to announce the immediate availability of Solus 4.1 Fortitude, a new Solus 4 series release. This release delivers a brand new

I don’t know what your opinion is regarding snaps and Flatpak, but in general I hate them.

I don’t know what your opinion is regarding snaps and Flatpak, but in general I hate them.

I typically don’t “hate” methods of software distribution myself. And I’ve found both snap and Flatpak useful for certain use cases.