So I have a client that really needs to put up a wireless PtMP setup between 3 shops that are about 300ft apart in a triangular shape. I would just put in the obvious Ubiquiti NanoBeam or NanoStations however there is one caveat. Semi-trailers are driven between these buildings on occasion. It would be difficult to get the height needed to shoot over them as well.

An average height of a semi truck is 13ft, 6inches. You can get it to work without any problems as long as you can get the antennas above, I’d say 14 feet. My remote office is roughly 1.5 miles from my house and I use a Litebeam AC on the house and a Nanobeam on my remote office to get internet there. It’s practically line of sight, with a few houses in between and I don’t ever seem to have issues with network drops.
The setup I would personally use would be how I have mine set up at my house and remote office. Use the Litebeam (Which has a greater beam radius) on the main building and then use Nanobeams pointing directly at the Litebeam. Just make sure they are mounted as high as you can get them (like I said prior, above 14ft)

So you think the fresnel of the Litebeam is not too tight for 300’? Here is a screenshot of the location and where the points will be. The building on the right is the base and it will be easy to put it 20ft up. The main problem is top left where it drops majorly in elevation. I would have to put a 15’ pole on top of the house to actually get it high enough. 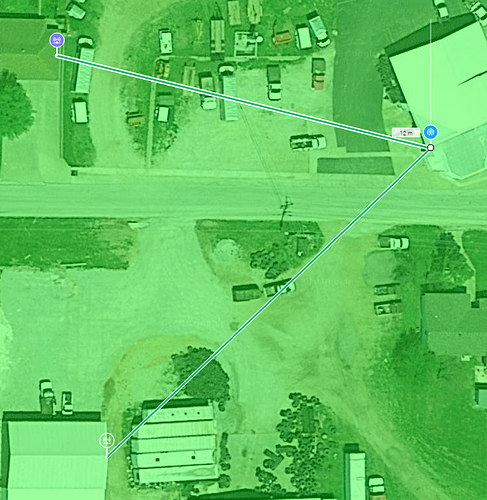 Lightbeam wouldn’t be too tight. It’s more designed for PTMP. Discuss with the customer about having a pole mounted on the house to get the antenna high enough.