Currently running pfSense (Intel® Xeon® CPU E5-2609 0 @ 2.40GHz
4 CPUs, 8GB RAM) in ESXi on a Dell R720. I would like to go with a standalone hardware appliance, as having a 2U server running at home is a bit overkill right now. Looking for suggestions. Using pfBlockerNG, Suricata, OpenVPN, etc.

Want enough horsepower to be able to do filtering/IDS/IPS etc., with horsepower and throughput to spare.

Thanks in advance,
Bradley

With Defaults + Surricata it pushes my 1000/1000 line just fine. I did add some tuneables which helped. 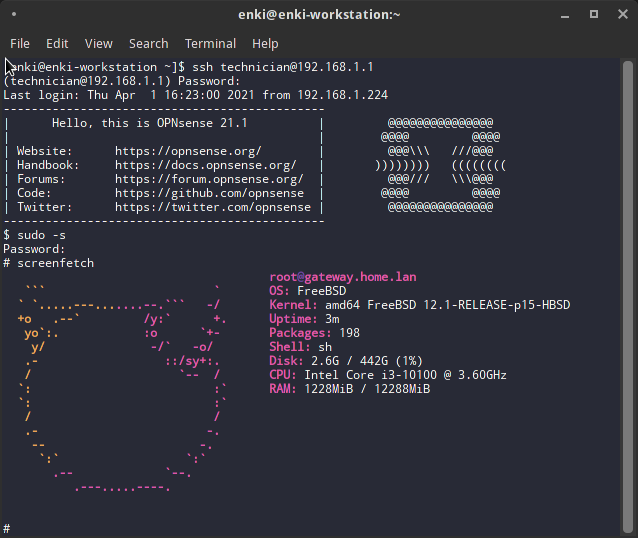 Originally I had it running on a HP 800 Desktop i5 4570, but I am looking for more of the Mini sized footprint.

What bandwidth are you needing to push?

The SG-1100 will do all of that, probably fine for a home DSL connection

Currently 1G/35Mb. Also do a bunch of BOVPN and OpenVPN for work. Don’t mind paying a bit extra for the speed and performance. Those were the models I have been looking at to replace what I have virtually.

I don’t have anything in the wild running everything you are looking for but the spec on the 1100 seems to indicate that it will more than cope with the general load but keep in mind that’s without filtering/IDS/IPS (I assume you are thinking Surricata).

If you want that kind of horsepower out of that small of a footprint, you are going to pay the tax for it. You are basically wanting a device that can push (1 gig I assume) with everything enabled. Anything in the NUCish form like protectli can easily get around $1,000.00 versus a similar spec’d SFF or mATX for half the price.

I have my doubts but no real world experience with the atom processor used in the 5100.

Turns out the solution was, as you suggested, setting Crypto Hardware as: AES-NI CPU-based acceleration.

Now I get close to 900 mbps in both directions. But interesting the C3758 is nearly maxed out (cpu usage at 94%) when it’s on the download side. The i3 is solid, encryption causing the cpu to roll along at 40%.

I’m not going to lie, I’m a huge fanboi of the i310100 for routing. For home use, it can do everything as long as you have the ram to match it. And it even has iGPU support.

Thank you so much for the detailed information, it is greatly appreciated!

So in other words, I would be better suited to building an i3 10100 in an mATX/SFF and come out way ahead. And then just installing an Intel NIC with the extra ports needed.

If constructing from scratch – take a look at units from Aliexpress. They supply companies like Protectl directly.

Currently 1G/35Mb. Also do a bunch of BOVPN and OpenVPN for work.

Cheap when bought used, comparable to the SG-5100 in terms of cpu + RAM etc. and can handle your connection speed pretty easily. Plus, near silent operation.

I haven’t done any IDS/IPS but since it is similar in configuration to SG-5100, you might be surprised.

Why not Virtualize it on the 720, then also put other vm’s on the box, your going t use the server later on right ? Why not start now with vm’s on esxi.

I have kind of a corollary question/issue for non-netgate hardware pfSense users; to what extent does the processor(s) actually inhibit bandwidth throughput? I have been running pfSense/pfBlocker/Suricata on a dual homed HP thin client with AMD G-T56N dual core processors running at 1.6 Ghz with 4 GB of RAM. ( I am not sure if I am actually using these in 64 bit mode since if I run sysctl -a | grep -i, I can see the follwing : “kern.sched.cpusetsize:32”, which leads me to believe I may have missed a BIOS setting and might be running in 32 bit mode, or some compatibility mode that defaults to 32 bit). My “problem” is that pfSense running on this hardware seems to be passing no more than about 640 Mbps (of an available 970 Mbps) through the firewall/IDS. This is perplexing to me since the processors never seem to indicate more than about 30% usage for more than a few seconds, the RAM seems similarly taxed, and as far as I can tell, the little firewall/IDS never pages anything to swap. This really isn’t hurting me at the moment, since I have a family of five sitting behind the firewall and no one complaining of slow performance, but I will be moving a production environment of 24 end users behind a pfSense firewall in the next couple of months, and I had planned to install pfSense on an old Optiplex 7010 SFF with 8 GB of ram and a quad core i5 to do that. I am now wondering if I have enough compute for that environment in the Optiplex, or whether I should bite the bullet and buy a Netgate 3100 to be sure. That has a dual core running at 1.6 Ghz as well, but seems to have much better reported firewall throughput than I am getting on non-netgate hardware. So my questions are two: How important is the processor speed for this type of application?, and how much more optimized is the performance on netgate specific hardware?

In my opinion, yes. In regards to both cost and upgradeability. It also seems the current offerings you are looking at in regards to processing power is bested by the i3 by miles.

Of course, the NUC style device by its nature is limiting.

As previously mentioned, a netgate 3100 has less CPU power than an i3 or i5 in general. I’m using an Optiplex 7020 for pfsense with IDS, and it hits the limit of my cable internet at 300 mbps.
How are you measuring your router throughput? I recommend iperf3 - it can reliably saturate even 10g ethernet.

Mine has an i3-4160. And I’m pretty sure that the CPU wasn’t limiting even with using openvpn (to the tune of ~200 mb/s - you’ll never get line rate on openvpn due to protocol overhead).